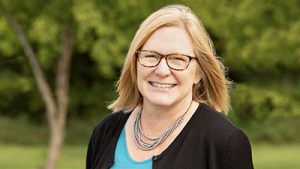 The halls of Congress will have another Mitchell Hamline alum after Michelle Fischbach ’11 won her election Tuesday over an incumbent who had held the seat for nearly three decades.

“I am honored to have the outpouring of support from Minnesota families across the Seventh Congressional District,” Fischbach said in a statement in the Bemidji Pioneer . “I am excited to hit the ground running in Washington to work on behalf of western Minnesota.”

Election Day was also Fischbach’s 55th birthday. She will join U.S. Rep. Tom Emmer, from the state’s adjacent 6th Congressional District, as the only two Mitchell Hamline alums in Congress. Fischbach graduated from William Mitchell College of Law in 2011; Emmer is a 1988 graduate.

There were previously two alums in Congress when Emmer’s tenure overlapped that of Wisconsin Rep. Sean Duffy, who graduated from William Mitchell in 1999 and who served from 2011-2019.

All three – Fischbach, Emmer, and Duffy – are Republicans.

Fischbach, who is from the town of Paynesville, Minn., rose to the rank of Senate president while in the Minnesota Legislature – the first woman to ever serve in that post. She defeated longtime Rep. Collin Peterson by more than 13 percentage points in a rural district where farming is a key industry and where Peterson had been serving as chair of the powerful Agriculture Committee in the House.

She will assume office in January.

You can read news articles about the race from the New York Times and Minneapolis Star-Tribune.