The office is located in Suite 159, at the end of the hall past Hachey Commons. 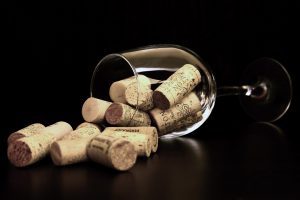 One hundred years after prohibition began on January 16, 1919, its undoing still strains principles of federalism and constitutional interpretation. In Tennessee Wine & Spirits Retailers Ass’n v. Thomas,[1] the authority of states to regulate alcohol under section 2 of the Twenty-first Amendment clashed with the Federal Judiciary’s power to strike down protectionist laws under the dormant Commerce Clause.

In 2016, two entities sought licenses to operate liquor stores in Tennessee. The first, Total Wine, is a national chain with 197 locations in 23 states; the second, Kimbrough Fine Wine & Spirits, is a single location owned by a couple that had moved to Tennessee shortly before applying for a license.[2] The Tennessee Wine and Spirits Retailers Association (“Association”) threatened to sue Tennessee’s alcohol regulatory agency to compel enforcement of Tennessee’s durational-residency requirement for alcohol retail licenses.[3] From there, the agency sought a declaration to determine the constitutionality of the residency requirements.[4]

Under Tennessee’s statutory scheme, only a two-year “bona fide resident” could obtain an initial retail liquor license.[5] Moreover, license renewal, which was required after the first year of licensure, required ten years of continuous residency.[6] A corporation, meanwhile, could only obtain a license if all its officers, directors, and owners satisfied the durational-residency requirements for individuals.[7] After the Sixth Circuit struck down the entire scheme as unconstitutional, the Association appealed only the validity of the two-year residency requirement.[8]

The Supreme Court affirmed, striking down Tennessee’s durational-residency requirement under the dormant Commerce Clause.[9] Justice Alito, writing for a majority of seven—including Chief Justice Roberts and Justices Ginsberg, Breyer, Sotomayor, Kagen, and Kavanaugh—held that section 2 of the Twenty-first Amendment does not insulate alcohol-related state laws from attack under the dormant Commerce Clause.[10]

While section 1 of the Twenty-first Amendment ended prohibition, section 2 gave states authority to regulate—and even prohibit—the transportation, importation, and possession of alcohol within their borders.[11] The entire Court agreed that section 2 “constitutionaliz[ed] the basic structure of federal-state alcohol regulatory authority” prior to prohibition.[12] The Justices diverged in deciding whether section 2 constitutionalized the dormant Commerce Clause’s application to state laws regulating alcohol.

Relying on prior interpretations of two pre-prohibition laws that formed the basis for section 2, the Court held section 2 gives states “leeway” to adopt alcohol-related laws that promote public health and safety but “does not license the States to adopt protectionist measures with no demonstrable connection to those interests.”[13] Accordingly, the Court modified its dormant Commerce Clause analysis for section 2.

Under the usual analysis, Tennessee’s durational-residency requirement would have been presumptively invalid as a facially discriminatory law.[14] However, recognizing the leeway afforded states under section 2, the Court asked “whether the challenged requirement can be justified as a public health or safety measure or on some other legitimate nonprotectionist ground.”[15] Four factors persuaded the Court that Tennessee’s durational-residency requirement was merely protectionist and not justified on public health or safety grounds: (1) the law expressly discriminated against nonresidents; (2) the relationship to health and safety was highly attenuated; (3) there was no showing the law actually promoted health or safety; and (4) nondiscriminatory alternatives were available.[16]

As a practical matter, the biggest takeaway of Tennessee Wine is that chain liquor stores like Total Wine are free to expand across state lines. It also leaves the door wide open for lawsuits challenging in-state presence requirements for online alcohol retailers.[21] States, meanwhile, retain some leeway to regulate alcohol on the basis of residency, but such laws will face heightened scrutiny.[22]

Tennessee Wine also appears to settle thirty-five years of tension between the Twenty-first Amendment and the dormant Commerce Clause. In Bacchus Imports, Ltd. v. Dias, a narrow 5-3 decision issued in 1984, the Court struck down a Hawaii tax exemption for locally manufactured alcohol because the law’s sole purpose was deemed protectionist.[23] In Granholm v. Heald, a vigorously debated 5-4 decision issued in 2005, the Court struck down Michigan and New York laws that permitted in-state wineries to directly ship alcohol to consumers but prohibited out-of-state wineries from doing the same.[24] The Court’s 7-2 holding in Tennessee Wine now solidifies the dormant Commerce Clause’s applicability to state laws regulating alcohol under the authority of section 2.

Finally, Tennessee Wine establishes a framework for analyzing alcohol-related laws under the dormant Commerce Clause. Under typical dormant Commerce Clause analysis, a facially discriminatory law is sustained only if it survives strict scrutiny.[25] A facially neutral law, meanwhile, is struck down only if the law’s burden on interstate commerce outweighs its “putative local benefits.”[26] The standard adopted in Tennessee Wine lies somewhere between these two categories. A facially discriminatory, alcohol-related law will be sustained only if it promotes a legitimate interest and is narrowly tailored to that purpose.[27] Promotion of public health or safety are legitimate interests—protectionism is not.[28] To be narrowly tailored, the law must actually promote public health or safety in the absence of nondiscriminatory alternatives.[29]

In Tennessee Wine, the dormant Commerce Clause delivered a heavy blow to section 2 of the Twenty-first Amendment. Section 2 continues to provide states some cover to regulate alcohol based on residency, but the Court will now likely view such laws with suspicion.