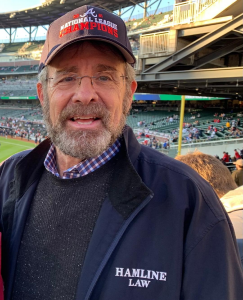 As a lockout in Major League Baseball enters its third month, we wanted to better understand some of the legal issues at play. We contacted one of Mitchell Hamline’s experts on all things baseball, Broward County (Fla.) judge Lou Schiff ’80.

A New York Mets fan until the Florida Marlins were created in 1993, Schiff is co-author of “Baseball and the Law” and also a longtime adjunct professor who teaches “Law and the Business of Baseball” each summer. It’s a one-credit course exploring several legal issues, from tax planning and player salaries to broadcast rights, franchise relocation, and steroids. This summer will be Schiff’s 10th year teaching the course at Mitchell Hamline.

Mitchell Hamline: Major League Baseball is in the middle of a lockout. The last baseball work stoppage in baseball, in 1994-95, was a strike. How is a lockout different than a strike?

Schiff:  During a strike, it’s the workers who tell management that they’re not coming to work. During a lockout it’s the opposite. Players can’t have access to club facilities to train or rehab with team doctors. It means no trades or negotiations with free agents and there’s complete radio silence. The league even took the step of wiping all MLB websites of any reference of current players, including photos or stories, which is something we didn’t have back in 1994.

MH: From the players’ side, what’s at the heart of this dispute?

Schiff: This is largely a classic labor dispute, along the lines of what you might see from, say, a teachers’ union or a municipal workers guild. But in this case, it’s the millionaires (players) versus billionaires (owners).

Among other things, the players want to raise the league minimum salary from $600,000 to $775,000. They also want protections against service-time manipulation, which is a tactic teams sometimes use by holding players in the minor leagues to keep them from automatic salary raises. The players association (union) is also proposing shortening the timeline for salary arbitration eligibility from three to two years, as well reducing the time for drafted players to reach free agency.

MH: And the owners?

Judge Lou Schiff ’80, speaking at an online event in September 2020 in his courtroom in Broward County, Fla.

Schiff: They are currently offering a minimum salary of $615,000 for players with less than one year of service.

They’re also digging in their heels on the six-year timeline to reach free agency, as well as three years before players can qualify for salary arbitration. They also want an expanded playoff that would involve either 12 or 14 teams.

In terms of bonuses, the owners have offered a pool of $10 million that would be distributed to the top 30 pre-arbitration players based on a metric called “Wins Above Replacement” (WAR), as well as whether players win awards such as Most Valuable Player or the Cy Young Award. The players association wants a bonus pool over $100 million.

MH: MLB is also the beneficiary of a famous and unique Supreme Court ruling from 1922 that granted it an exemption from federal antitrust regulations. Does that factor into the current contract talks?

Schiff: From the standpoint of the collective bargaining agreement, I don’t think it factors in very heavily.  However, there is a current lawsuit challenging MLB’s exemption to the Sherman Antitrust Act, but it relates primarily to the operation of minor league teams.

MH: Do you think the two sides will be able to come to an agreement before spring training, or might opening day be delayed?

Schiff: I don’t know. I think both sides are being foolish for handling it this way. They could have continued without a contract into next season, then made whatever deal they reach retroactive to the first day of the season. But, for whatever reason, Major League Baseball feels it’s in their best interest to force the players’ hand now. But, just like back in 1994, I worry this will only drive fans away, especially young people.

If the owners’ position is that they need to do this because they’re not making any money, well, the New York Mets sold for over $2 billion in 2020. The Marlins sold for $1.2 billion in 2017, which isn’t a bad return considering they were acquired for $158 million in 2002. Now teams are arguing about contracts that would cost them maybe $10, 20, or 30 million more.

I just worry if this goes on much longer, people will just find something else to do in April, May, and June. If people don’t want to watch you play, then you don’t have the sport. I think a long, drawn-out labor dispute will come at significant cost to the overall health of the game. 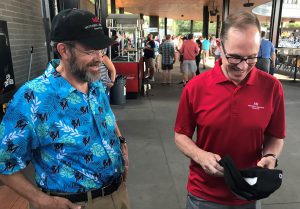 Lou Schiff ’80 visits with Dean Anthony Niedwiecki before a St. Paul Saints game in July 2021 in which Niedwiecki threw out the first pitch.

MH:  Regardless of how long the lockout lasts, it seems you’ll have a lot of new material for your next baseball and the law class.

Schiff:  Oh, that is for sure. I really look forward to teaching this class every year, which would never have happened without the ongoing support of the Mitchell Hamline administrators, faculty, and students.

The Minnesota Twins and the St. Paul Saints have also been wonderful partners in allowing our students to see first-hand the business of baseball. It’s an experience you just can’t get from a textbook.