The History Center in Development

As part of this agreement, Hamline University and William Mitchell agreed to establish a permanent history center at Mitchell Hamline School of Law that would reflect the origins, mission, programs, and contributions of the students, faculty, staff, and alumni of both law schools. In 2016, Mitchell Hamline President and Dean Mark Gordon convened a Mitchell Hamline History Center Committee composed of alumni, emeritus and current faculty, and staff members from both legacy schools, co-chaired by senior faculty members from each school, to plan and establish this center, its exhibits and programs.

The Mitchell Hamline History Center is in the early stages of its development. With the help of small grants made by the Minnesota Historical Society out of Minnesota’s Legacy Fund, the committee has been doing long-term planning for a permanent center, as well as short-term programming while the permanent center is being developed.

The Mitchell Hamline History Center mission is to develop and maintain this center to preserve the rich legacy of each law school; collect, exhibit and interpret archival material pertinent to the combined history; and establish a continuing means of understanding the new institution’s origin, evolving development and impact on the community and the ever-changing field of legal education.

The Mitchell Hamline History Center will be a valid and meaningful vehicle that celebrates the history of the new and predecessor schools, including aspects of missions from the past. It will develop, maintain and support pertinent archival research into how the combined school has served and is serving the community, particularly with respect to access to legal education, public service and improving the law. By strengthening an integrated identity, it will foster understanding of the school’s roots and evolving history.

The Mitchell Hamline History Center Committee was appointed by the president and dean. Its current members include:

Mitchell Hamline School of Law was born out of a 2015 combination of the William Mitchell College of Law and Hamline University School of Law. With over 19,000 alumni and forty faculty members, the new law school is leading the way in innovating new legal education opportunities in its blended programs and experiential education in particular.

One historical stream of Mitchell Hamline School of Law goes back to the 1900 founding of a night law school for working people who needed an alternative to daytime law school. Hiram Stevens, a Vermont native who had read law in New York, and Clarence Halbert and Ambrose Tighe, who had degrees from Yale, worked with Thomas O’Brien, who read law in Minnesota and Moses Clapp, originally from Indiana and the University of Wisconsin Law School, to form the St. Paul College of Law. The college, with a first class of 20 students and a tuition of $60, eventually received ABA approval in 1938.

Former Justice William Mitchell of the Minnesota Supreme Court was to be its first dean, but when he unexpectedly died, Hiram Stevens took the deanship. One of the attorneys and judges who made up its faculty was Harry Blackmun, later to serve on the United States Supreme Court, who taught at the college from 1935 to 1941. Another St. Paul College of Law faculty member was Warren Burger ’31, who became chief justice of the United States. The first woman to serve on the Minnesota Supreme Court was William Mitchell alumna Rosalie Wahl, one of many alumni from both William Mitchell and Hamline University School of Law to serve with distinction on state trial and appellate courts.

The second historical stream that became Mitchell Hamline began when Hamline University started offering a program in legal education soon after its founding in Red Wing, Minnesota in 1854. The University was named after Methodist Bishop and lawyer Leonidas Lent Hamline, whose donations funded the establishment of the University. The law school, led by lawyer Benjamin F. Crary, offered a two-year legal studies program for an annual tuition of $15 per year in 1857. When the Civil War broke out in 1861, most of Hamline’s students joined the Union army; and, bereft of students, the legal studies program closed.

Hamline’s second venture into legal education began in August 1974, when it became a home to a new law school organized by about three dozen law students attending the proprietary Metropolitan School of Law in Minneapolis. Fearing that their law school was not advancing toward ABA accreditation, the students met at the Normandy Inn in Minneapolis in December, 1972, to found a new law school built from the ground up. The Metropolitan students recruited judges and lawyers such as Midwest National Bank vice-president James Polzak to assist in the founding of the new Midwestern School of Law, and Hamline’s first dean, 31-year-old lawyer Richard T. Oakes ’69. In 1975, after encouragement by Hamline trustees such as Minnesota Supreme Court Justice James Otis, the law school became an official part of Hamline University; and it was provisionally accredited by the ABA in the same year.

Hamline University School of Law inaugurated one of the first weekend part-time J.D. programs in the country. It became especially known for its public service focus in areas like children and the law, and its highly ranked Dispute Resolution Institute and Health Law Institute, which offered specialized certificates to practicing lawyers and non-lawyers. Hamline’s interdisciplinary approach to legal education was reflected in its dual degrees: J.D./MBA, J.D./Master in Public Administration, and J.D./Master in Fine Arts in Writing; as well as its Master in the Study of Law (MSL) degree for non-lawyers.

An animated history of the predecessor law schools 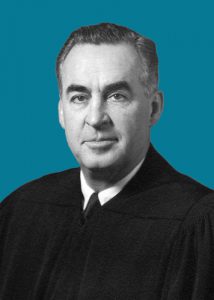 The half-day CLE program, entitled “Judge Edward J. Devitt and Practical Justice,” was attended by over two hundred judges and lawyers, including former clerks and friends of the Judge.

Former Devitt law clerks Greg Stenmoe ’81 and Brian Short led the session with a personal and professional biography of Judge Devitt, telling stories about several cases over which Judge Devitt presided in his career.

A panel focusing on Judge Devitt’s contributions to the practice of law in the federal courts, including his work with Chief Justice Warren Burger and service on the Devitt Commission. That work led to the groundbreaking MacCrate report which recommended important changes to legal education, many of which were adopted very early by William Mitchell College of Law. Mitchell Hamline alum and former chair of the William Mitchell Board Daniel O’Keefe ’78 spoke about Judge Devitt’s contributions to raising the quality of federal bar practice. Professors Eric Janus and Ann Juergens discussed his contributions to legal education, including his collaborations with the first female Minnesota Supreme Court justice and former clinical instructor at William Mitchell, Rosalie Wahl ’67. Academic Excellence Dean Dena Sonbol ’08 moderated this panel.

Judge Devitt’s contribution to the professionalization and efficient administration of the federal courts was the subject of a panel that included United States District Judges Donald Alsop and Wilhelmina Wright, and Professor Emeritus Peter Thompson, an expert on federal jurisdiction and procedure. Mitchell Hamline professor and former Devitt clerk Eric Tostrud ’90 presided over this question and answer panel.

The law firm of Briggs and Morgan, and the MSBA Civil Litigation Section co-sponsored this event.

A video recording of panels for this event will be available  here in the near future.