Judge Marrinan has been a trial court judge in Minnesota’s Second Judicial District (St. Paul and suburbs) for nearly 30 years.  Before becoming a judge in 1984, Judge Marrinan had twelve years of trial experience, first as a trial lawyer in private practice (primarily insurance defense), then as a felony prosecutor in the Ramsey County Attorney’s Office.  Since 1992 she has been an adjunct professor at William Mitchell, teaching in Advanced Trial Advocacy and Legal Practicum courses.  She has taught at numerous hands-on seminars sponsored by NITA, Minnesota CLE, the Minnesota Advocacy Institute and the U.S. Department of Justice.

Judge Marrinan serves as Chair of the Conservatorship Task Force, a position she has held since 2003. In tandem with other judges and representatives of the probate bar, she works to define ways the court can better monitor and safeguard vulnerable adults and their resources.  She was also heavily involved in engineering and implementing the Ramsey County Mediation program in the Ramsey County Family Court in 1986. This was the first such program in the state and has, since then, been used as the model for all other districts. 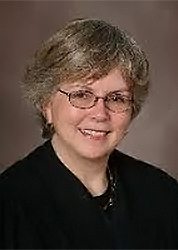