Donors meet students who benefit from their scholarships

Mitchell Hamline students received $800,000 in scholarships last year, support that helped them continue working toward the goal of earning a J.D.

Donors who created and continue to fund those scholarships got a chance to meet with the students who benefit from that assistance during the annual Scholarship Luncheon on Thursday, March 22, at Mitchell Hamline.

“Thank you from all of us from the bottom of our hearts for everything you’re doing to enable our students’ dreams to come true,” Gordon said. 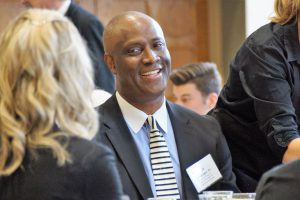 That’s something Ben Omorogbe ’95 understands well. As an immigrant from Nigeria, one of the world’s poorest countries, he relied on scholarship support to fulfill his dream of attending law school and becoming a lawyer.

“A dream that became a reality only because of the kindness of so many people—many of them I never knew or met,” Omorogbe said.

Omorogbe, who earned his degree from Mitchell Hamline predecessor William Mitchell, is vice president and associate group general counsel at The Travelers Insurance Companies. His extensive involvement with the school started as a student, when he served as both vice chair and chair of the Student Bar Association. After graduation, he served on the alumni board and the board of trustees. He’s also been a student mentor, a fundraising volunteer, and a host for numerous alumni and admitted student events. He currently acts in an advisory role to the school.

In 2013, Omorogbe created the Leadership Scholarship, a fund that he said “recognizes students who are doing well academically, and who are also involved in leadership positions in student organizations or in their community.” 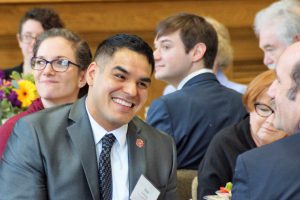 “It makes me realize someone believes in me, and someone is helping me along the way, and I am not alone,” Gallardo said.

Immigration law is Gallardo’s passion. He was determined to go to law school after his brother was arrested by Immigration and Customs Enforcement agents in 2014. His brother could be deported to Mexico in 2020, a fate Gallardo fears hangs over his father’s head as well. During this year’s J-term, he participated in a pro-bono immigration clinic at a detention facility in Texas offering legal advice to mothers and their children seeking asylum.

This summer, Gallardo is headed to Chile, where he’ll study international law, something he told Mitchell Hamline’s scholarship supporters he wouldn’t have been able to do without their help.

Previous Post:
Encouraging students to use the law to protect the environment
Next Post:
Barbara Zurek’s legacy celebrated with memorial scholarship