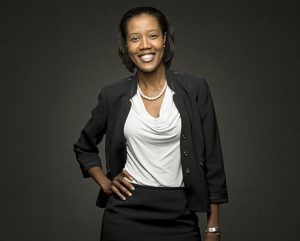 After graduating from Florida A&M University, Freeman moved to the Twin Cities to work at 3M as an engineer. Here, she was introduced to intellectual property (IP). She was frequently meeting with the 3M attorneys to figure out how to protect their products—from there she began to love IP. “In undergraduate, I never heard of intellectual property. I had no clue it was a potential career path with my technical background,” said Freeman.

After meeting with several 3M attorneys, it became clear that William Mitchell (a predecessor school to Mitchell Hamline) was the school to attend if she wanted to practice IP. She asked the attorneys what their day-to-day tasks were like, where they went to school, and what school in Minnesota was best for IP. She chose William Mitchell because of its evening program, which would allow her to juggle working full time and being a single mom.

Freeman worked full time at 3M as an engineer for 11 years and throughout law school. When she graduated in 2011, the economy was struggling, so she had low expectations for her legal career outlook. However, when she was studying for the bar exam, Merchant & Gould called to recruit her. “I asked to wait to interview until after the bar exam,” said Freeman. “It worked out great, and I started with Merchant the month after the bar.”

When asked what she enjoys about patent law, Freeman said, “It’s always looking at new technology and the next, best, greatest ideas and inventions—it’s very fun. It never gets boring. There is always something new to review and learn. You are constantly challenging yourself, being creative, trying to figure out ways to provide the best service for your clients and being creative in doing that. That is the part that’s really fun for me. I enjoy interacting with the inventors and seeing their excitement. It reminds me of my days at 3M.”

Freeman noted that networking, seeking mentors, and presenting herself as a professional helped her immensely in her career. She recommends that prospective and current students also take these three career building tactics seriously. “Even when you’re a student in law school, you should present yourself as a professional, as if you’re already a practicing attorney,” said Freeman.

“Networking in law school and in practice never ends. I enjoy networking. In a room full of people, I didn’t wait for someone to come to me… I was engaging them. You have to force yourself to get out there, even if you’re not comfortable, even in your legal career,” said Freeman.

“I’ve had great mentors along the way, in law school, at Merchant, and I use them,” said Freeman. “Students should seek out mentors with experience in the specific areas they’re interested in. It’s very important to have someone you can confide in and speak to about what it takes to be successful in the field.”