Chat with a Librarian
Purchase Suggestion

Locked Up & Locked Out: Reforming Inequity in the Criminal Justice System 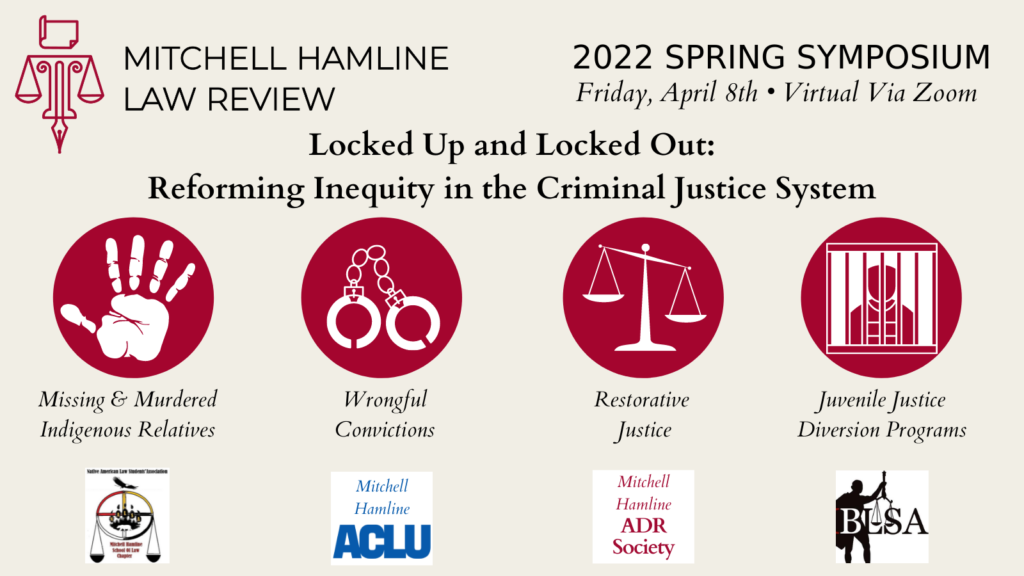 On Friday, April 8th from 9:00am-5:00pm, the Mitchell Hamline Law Review will be hosting their annual spring symposium. This year’s theme is Locked Up & Locked Out: Reforming Inequity in the Criminal Justice System.

The symposium panels will highlight and explore the deep fissures in our criminal justice system and feature discussions with lawyers and community leaders who are making change through their representation, advocacy, and leadership. Speakers will discuss some of the most pressing issues in this space, including missing and murdered Indigenous relatives, wrongful convictions, restorative justice in practice, juvenile diversion programs, and so much more. At the conclusion of the event, the keynote speaker, Anthony Ray Hinton, will share his decades-long journey to exoneration and freedom while surviving for 30 years on Alabama’s death row.

You can read more about the symposium on the MHLR website or in the Library’s Mitchell Hamline Symposiums guide.

If you are interested in learning more about these topic covered in the symposium, the Library has gathered related materials for a book display on the 2nd floor. A list of the resources included is below.

These materials can be checked out by members of our community so if you see something you are interested in, contact circulation@mitchellhamline.edu.

Display and bibliography developed by Kelsey Schmidt and Steve Liska.

Locked Up & Locked Out Resources

The Innocent Killer: A True Story of a Wrongful Conviction and its Astonishing Aftermath. Michael Griesbach. KF225.A84 G75 2013