Chat with a Librarian
Purchase Suggestion

This is a time to celebrate the rich history, culture, and traditions of American Indians and Alaska Natives, as well as acknowledge the important contributions of Native people.

The Library’s book display this month features titles by and about our nation’s original Indigenous peoples.

These materials can be checked out by members of our community so if you see something you are interested in, contact circulation@mitchellhamline.edu.

Display and bibliography developed by Kelsey Schmidt and Steve Liska. 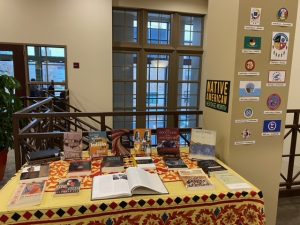 In the Footsteps of Our Ancestors: The Dakota Commemorative Marches of the 21st Century. Waziyatawin Angela Wilson. E99.D1 I25 2006 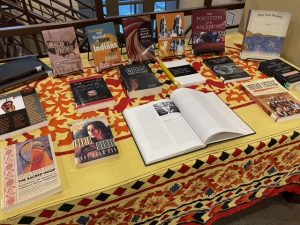 At Mitchell Hamline School of Law, we acknowledge the land where the law school is located in the following way:

“We acknowledge our presence in the tribal and treaty homelands of the Dakota Oyate since time immemorial. These lands are home to the Sisseton, Wahpeton, Mdewakanton and Wahpekute Dakota peoples. There are four Tribal Nations who remain in these lands as tribal governments, the Lower Sioux Indian Community, the Prairie Island Indian Community, the Shakopee Mdewakanton Sioux Community, and the Upper Sioux Community. We acknowledge and respect the Dakota Oyate as part of the larger Sioux Nation, traditionally known as the Seven Council Fires, the Oceti Sakowin. We also acknowledge the regional territory of the Ojibwe/Chippewa/Anishinaabe peoples in these tribal homelands. There are seven Tribal Nations who remain in these lands as tribal governments, the Bois Forte Band of Chippewa, the Leech Lake Band of Ojibwe, the Fond du Lac Band of Lake Superior Chippewa, the Grand Portage Band of Lake Superior Chippewa, the Mille Lacs Band of Ojibwe, the Red Lake Band of Chippewa Indians, and the White Earth Nation. We also acknowledge the ancestral connection of the Ho-Chunk Nation to this region. In these tribal lands, Indigenous peoples have joined together in community, stewardship, and spirituality upholding traditional values and legal principles.” (Native American Law and Sovereignty Institute 2022).”