With the stroke of a pen Thursday, officials with William Mitchell College of Law and Hamline University created a combined institution, Mitchell Hamline School of Law. 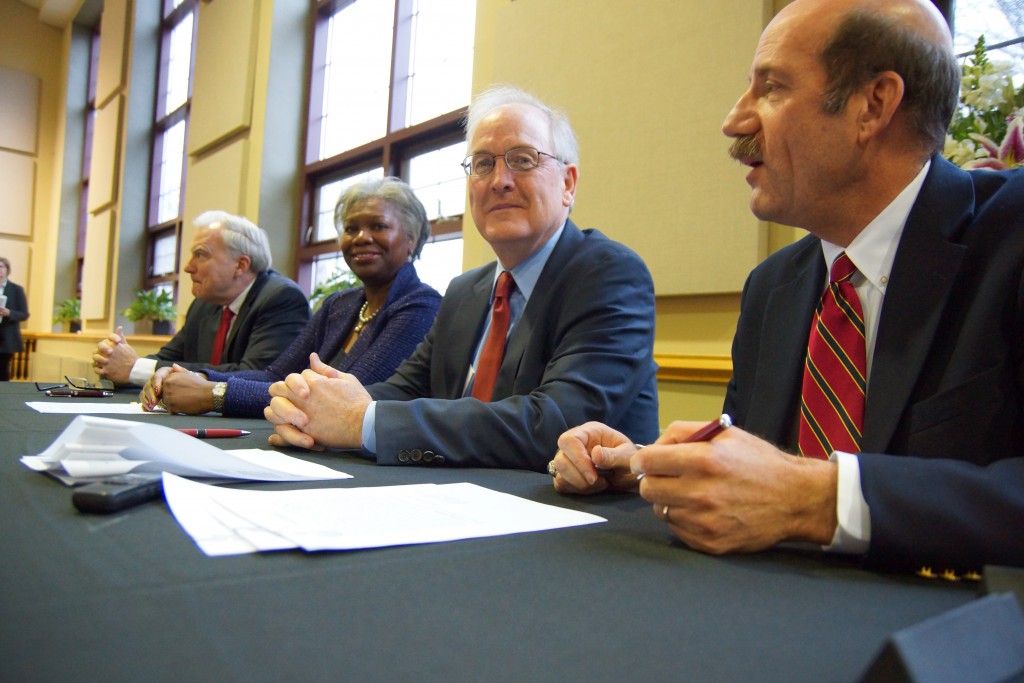 “What is Mitchell Hamline School of Law? We are a community committed to justice, to access, to service, and to training. We teach, we learn, we practice, we excel, and we serve. We train our minds, we raise our sights, we open our hearts. We have the best faculty, the most wonderful staff, the most incredible students, and the most phenomenal alumni,” Gordon said. “Minnesota’s most prominent law school is about to become a national leader. We are now the largest law school in the region, but more importantly we are the best law school in the region, and the rest of the country—here we come.”

At around 12:20 p.m., with the signing completed, Gordon took the stage to say, “It is my incredible honor to be the first person to say welcome to Mitchell Hamline School of Law,” which was followed by a standing ovation.

“We couldn’t be more excited to launch Mitchell Hamline School of Law, which we are confident will retain and extend the best of each predecessor law school and become the pre-eminent institution in the region for practical, problem-solving legal education,” said O’Keefe, who used the same pen at Thursday’s closing that he did to sign the combination agreement earlier in the year.

“The two institutions have similar values and philosophies, and combining our law school with William Mitchell will maximize the strengths of both in a way that will be hugely beneficial to law students and to our Hamline University students,” said Miller. “We see great opportunity for collaboration between Hamline University and the combined law school, going forward.”

Mitchell Hamline is the product of a combination between William Mitchell College of Law and Hamline University School of Law, two institutions that have provided practical, hands-on legal education for a combined total of more than 150 years. The two schools announced in February 2015 they had agreed to combine, subject to acquiescence from the ABA.

Mitchell Hamline is an independent, autonomous school that enjoys an affiliation with Hamline University, allowing students to earn dual degrees and have access to Hamline’s athletic facilities, library, and cultural programs. It is the largest law school in the region, with approximately 1,000 students and 42 full-time faculty. It has nationally ranked offerings in alternative dispute resolution, clinical education, health law, and part-time programs; an array of certificate and dual-degree programs; and an alumni network of more than 19,000—the largest in the region. It also has more enrollment options than any other law school in the country, with full-time, weekend, and part-time programs, including the nation’s first on-campus/online J.D. program at an ABA-approved law school.

It will be housed primarily on the former William Mitchell campus, at 875 Summit Ave. in St. Paul. New signs and banners reflecting Mitchell Hamline were up on Thursday, and officials will use the time between now and Jan. 2, when students start arriving back on campus, to further revamp the space to reflect the combined school, said Gordon.