Third-year student Kristine Britven won the U.S. portion of Ernst & Young’s “Young Tax Professional of the Year” competition in New York City on Sept. 22. At the end of November, she will advance to the global portion of the competition in Amsterdam, where she will compete against tax students from around the world.

Britven advanced to the national competition on the strength of her written analysis of four international tax planning problems. She competed against other accounting, J.D., and LL.M. students. In New York, she presented her written analysis to 10 judges and worked on a team with other competitors to solve a tax issue. The competition was narrowed to two finalists, who were each given five minutes to prepare an oral argument. “I was shocked when they announced I won,” Britven said. “I was at a loss for words.” 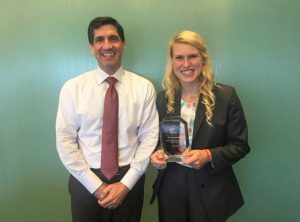 Professors Allen Blair, Morgan Holcomb, and Denise Roy and security guard Dave Savard acted as Britven’s competition coaches. Britven was particularly thankful for Savard’s assistance. She said his practical accounting knowledge helped her to prepare for the competition, and she even called him from New York prior to the competition to review her presentation one last time. Savard is an auditor for the Minnesota Department of Revenue and has worked part-time as a Mitchell Hamline security officer for the past 40 years.

Martin Fiore, Americas Tax Talent Leader at Ernst & Young, said, “Kristine is truly an exceptional young woman, impressing our jury of EY partners with her knowledge of tax, law, and technology, as well as her presentation skills.” Now, Britven participates in a Skype call every Friday with two coaches from Ernst & Young who are helping her study international taxation to prepare for the global competition.

As an undergraduate at the University of Minnesota Duluth, Britven took an accounting course that piqued her interest in becoming a tax attorney. She has taken several tax courses at Mitchell Hamline. In the winter, she volunteers at Prepare + Prosper completing tax returns for low-income families. Mitchell Hamline alum Jessica Dahlberg ’15 helped Britven secure a summer 2017 internship at Grant Thornton, an audit, tax, and advisory services firm. Britven was subsequently offered a full-time position at Grant Thornton upon graduation.