Mitchell Hamline students Abdisamed Awed and Susana Muñoz returned to the U.S. after a recent international mediation competition in Paris with an impressive 3rd-place finish and new skills in dispute resolution. Both are charting a path in law that reflects the recent immigrant experience of their families—Muñoz as a first-generation Mexican American and Awed as a refugee from Somalia.

First, to the contest. 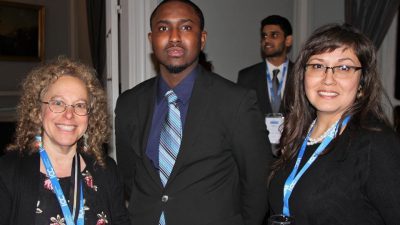 Prof. Sharon Press (left) with Abdisamed Awed and Susana Muñoz at the International Chamber of Commerce Mediation Competition in Paris.

The five-day International Chamber of Commerce Mediation Competition was held early in February in Paris. It brought together 66 teams from 32 countries for mediation sessions focused on international business. Only law schools that show a dedication to teaching dispute resolution get invited to the contest. Mitchell Hamline made the list because of its nationally ranked Dispute Resolution Institute.

Awed and Muñoz faced a major hurdle in preparing for the contest—they couldn’t meet face-to-face to run through the client/attorney sessions they needed to practice. That’s because while Awed is a full-time second-year student at Mitchell Hamline in St. Paul, Munoz, also in her second year, lives in New Mexico and is in the school’s partially online, partially on-campus Hybrid J.D. program. But what appeared to be a challenge at first, Awed says, actually helped the team hone the skills they needed to succeed.

“It helped us listen very clearly to what each person was saying,” Awed said. “The distance made us intuitive in that sense and really helped us read each other.”

Professor Sharon Press, the director of Mitchell Hamline’s Dispute Resolution Institute and one of the team’s coaches (the other was Dean of Students Lynn LeMoine ’11), says Awed and Muñoz were particularly accomplished in demonstrating mediation advocacy skills in a very authentic manner.   Press, who traveled to Paris with the team, says the professional mediators acting as the competition’s judges and mediators took note.

“Nothing was scripted,” Press says. “Every judge commented on their incredible teamwork and their ability to stay in their roles (as lawyers and business clients), and also commented on how authentic it was.”

Awed and Muñoz faced several days of tough competition at the event. Once they advanced past the preliminary rounds and entered the finals , the intensity cranked up. After winning their morning sessions, they would move on to an afternoon contest, then return early the next morning to begin all over again. They made it all the way to the semi-finals, wrapping up the international competition with a 3rd-place finish.

“They really represented Mitchell Hamline and the USA in a great way,” Press says.

Finishing in the top three teams at the ICC competition left both Awed and Muñoz with a sense of accomplishment, but it’s also inspired them to explore how they could use their new skills in alternative dispute resolution after they graduate.

Muñoz says she already acts as a mediator in her current job as a supervisor in the Doña Ana County Magistrate Court in Las Cruces. But after graduation, she wants to start her own practice focusing on criminal defense. Since taking part in the competition, she’s thinking of adding dispute resolution to the work she does.

“It has opened up more possibilities,” she says. “I’m looking more closely at incorporating a mediation component to my practice.”

Muñoz was born in the U.S. and is first-generation Mexican-American. Everyone else in her family —her parents and her siblings—was born in Mexico. She says growing up in a family where the children acted as interpreters for their parents left her with a desire to be a “voice for the disadvantaged,” something she hopes to do by focusing on helping clients with the criminal appeals process.

Awed, who goes by AJ, says he hopes to use his mediation skills in a future career that was shaped by his family’s immigration story as well.

He was born in Somalia, but his family fled the country a few days later to escape civil war. They stayed in a refugee camp in Kenya until Awed was 3 and then came to the U.S., settling in Virginia.

Awed says he’s always wanted to put his J.D. to use in international business, but mediation wasn’t on his radar until he started preparing for the competition in Paris. Now he hopes to return to Somalia a few years after he graduates to do his part to rebuild the country through mediation.

“I’m very much driven to do something back home (in Somalia),” Awed says. “Mediating conflicts between companies or forming companies is a need in Somalia. That’s something I want to be involved in.”