Donors meet the students they support at Scholarship Dinner 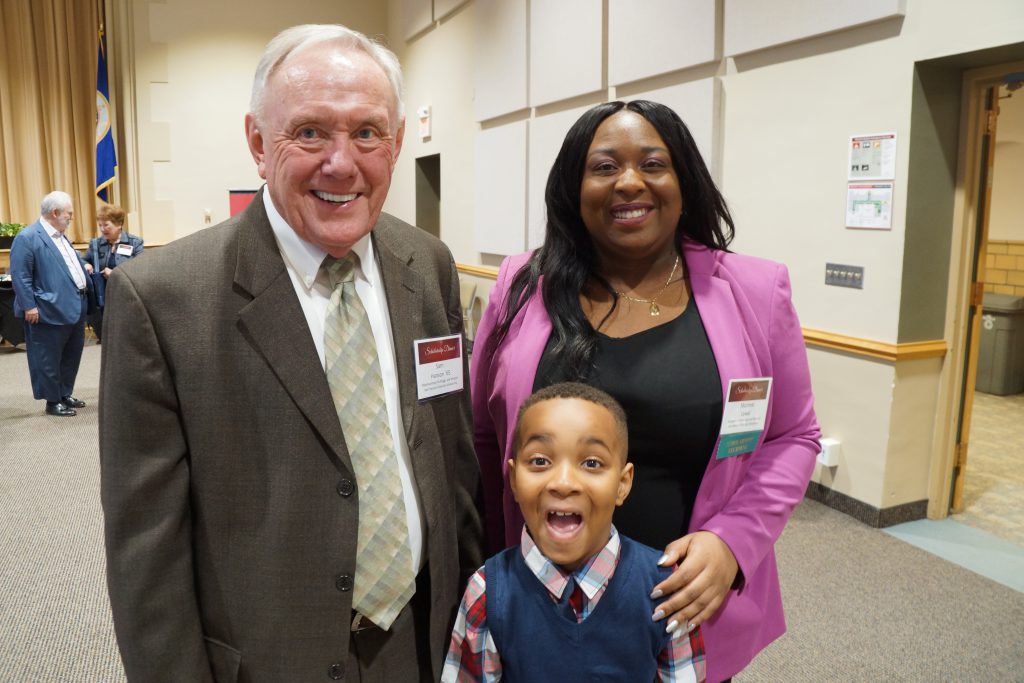 Most students at Mitchell Hamline School of Law receive scholarship aid and much of that support comes from privately funded endowments. The school currently has 213 endowed scholarships, which generated nearly $800,000 in scholarship and program support this year.

With generous donor support of its scholarship program, Mitchell Hamline is able to recruit promising students from diverse backgrounds and help them pursue their dream of law school. On Tuesday, March 26, students had a chance to meet—and thank—the donors who created those scholarships at Mitchell Hamline’s Scholarship Dinner.

Hanson earned his J.D. from Mitchell Hamline predecessor school William Mitchell College of Law in 1965. After graduation he joined Briggs and Morgan, where he practiced for 34 years. He was appointed to the Minnesota Court of Appeals in 2000 and then the Minnesota Supreme Court in 2002. He retired from the state’s highest court in 2008 and rejoined Briggs and Morgan.

Hanson has served the school in many ways—he’s taught as an adjunct, founded his alma mater’s first alumni association, and served as secretary, vice chair, and chair of the board of trustees.

He maintains that supporting students through scholarships is one of the most rewarding things he does at Mitchell Hamline and hopes that support helps diversify the pool of practicing attorneys.

“We are honored to be able to be your sponsors in your education,” Hanson said at the event. “We dream as you do about your future.”

3L Muteeat Lawal is one of the recipients of the Briggs and Morgan-Sam Hanson Diversity Scholarship. Lawal told donors that their “kindness and generosity” helped her fulfill the dream of attending law school.

Lawal said the support allowed her to attend Mitchell Hamline full time, something she wouldn’t have been able to do if she had to work full time and take care of her son. “It was such a relief,” Lawal said. “I had more time study and take care of my son.”

Going to law school was still a challenge, Lawal said, but now she can see a legal career in her future. She graduates in May and is currently working as a judicial clerk to Ramsey County Judge Nicole Starr.