The Mitchell Hamline Law Review has honored two alums for their work on the student-edited legal journal during their time in law school and for the work they’ve done in their careers since.

Judge Elizabeth Cowan Wright ’06 and Victor Vieth ’87 each received a 2019 Wallace-Lerner Award for Excellence in Leadership during the law review’s annual banquet on Friday, March 29. Click here to see photos of the event.

Judge Wright was sworn in as a U.S. Magistrate Judge on Sept. 4, 2018. Before serving as a judge, she litigated patent cases for the firm Faegre Baker Daniels.

Vieth is the founder and former senior director of National Child Protection Training Center at Gundersen. He’s currently the director of research and education for the Zero Abuse Project at Mitchell Hamline. 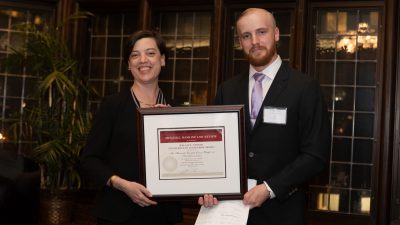 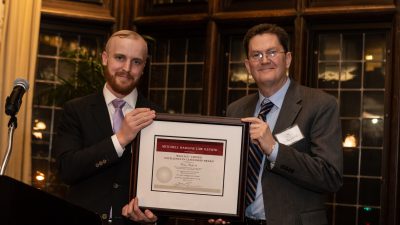