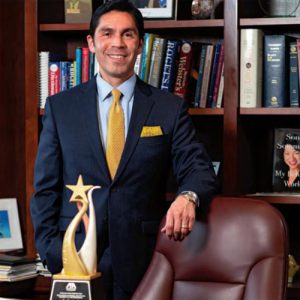 Reyes: ‘I want to put other people in a position to succeed’

When he stood before an audience at the American Bar Association’s mid-year meeting in Las Vegas in January 2019, Minnesota Court of Appeals Judge Peter M. Reyes Jr. ’97 (WMCL) decided it was time to share a story he had never before told publicly.

Reyes was there to accept the ABA’s Spirit of Excellence Award, which honors those who have traveled “to the stars through adversity” by embodying excellence and supporting others in their legal careers. He was singled out in particular for working to diversify the legal profession.

He had previously talked about how his grandparents were migrant farm workers who moved to Minnesota from Mexico. What he hadn’t disclosed was that his father, an alcoholic, almost choked his mother to death one night in a drunken rage until Reyes dragged him off her.

“My mother later told me that if I had not stopped him, she would be dead, he would be in jail, and we would be orphans,” he said.

Reyes didn’t want to become a man like his father. Instead, he modeled his life after his mother’s. “She’s someone who is always working in the best interest of others, and I’ve always tried to emulate that,” Reyes said. “My personal brand is I want to put other people in a position to succeed.”

That commitment is reflected in the numerous leadership positions Reyes has held throughout his career.

In law school, he discovered a love of intellectual property law, which he went on to practice at Robins, Kaplan, Miller & Ciresi; Cargill; and Barnes and Thornburg. Reyes found that while Latinos are underrepresented in the legal profession generally, they are even more scarce in IP law. When he became president of the Hispanic National Bar Association, he initiated a program that brings 25 Latino law students from across the country to Washington, D.C., each year for a weeklong intensive introduction to various areas of IP.

Reyes has also served three terms as president of the Minnesota Hispanic Bar Association, where he founded a judicial endorsements committee to increase Latino representation among judges. And he works hard to hire and mentor diverse clerks—defying the tendency to look for talented attorneys only among white men.

“I’ve had some incredible clerks,” he said. “My experience has been that there are a lot of extremely qualified people of color and people of diverse backgrounds who can and should be hired.”

One of those clerks was Jennifer Anderson ’17. Anderson, who is Native American, said Reyes makes an effort to recognize qualities in addition to a prospective clerk’s GPA or whether he or she served on the school’s law review.

“He looks at things such as prior work experience, he looks at life experiences, he breaks outside the mold of just people who went straight to law school (from college),” she said.

She was inspired by Reyes’ generous mentorship and the leadership he displays, such as his service work for a number of bar associations. “He taught me there’s more to life in the legal community than just the practice of law.”

Emily Gurnon, a former newspaper reporter, is a writer and editor in St. Paul.