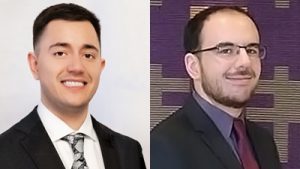 Andrade and Petersen are both rising 3Ls in Mitchell Hamline’s on-campus program, and they have known each other since they were in the same 1L section. They were encouraged to try out for the competition team by coach Esteban Rivera ’10. Rivera specializes in immigration law at Rivera Law Firm, which he founded in 2013, and he is the 2020-21 president of the Hennepin County Bar Association.

The team also benefited from the mentorship of Judge James Morrow ’78, who attended many of their oral argument practices and provided helpful feedback. “He wasn’t super familiar with the subject matter, but it was better that way because he was able to ask foundational questions of us and really pick out what we knew or didn’t know,” said Andrade. “He was a huge help.”

Petersen and Andrade tried out for the team last November, using the briefs and oral arguments they had worked on in their 1L Lawyering course. They received the competition problem in December, wrote their brief this January, and began oral argument practices in February. The competition was scheduled to take place in March at HNBA’s 2020 Corporate Counsel Conference in Phoenix.

Unfortunately, due to COVID-19, the conference was rescheduled and the oral argument portion of the moot court competition was canceled. Instead, teams were judged solely on the strength of their written brief. Although disappointed they didn’t get the chance to demonstrate their oral argument skills, or travel to Phoenix, Andrade and Petersen’s months of hard work still paid off in a first-place win and a shared $7,500 scholarship.

Both spoke highly of the competition and the experience they gained from it. “I have a great thing to put on my resume,” said Petersen. “And we can use that brief as a writing sample. It’s just a really good thing for students to get into these competitions. It’s closer to real life than you’ll see in class.”

Petersen is currently preparing for a summer internship with a firm in Fergus Falls, Minnesota. After earning his J.D., he’d like to practice either personal injury or constitutional law. Andrade’s internship with a public defender in Minnesota’s Washington County is currently on pause due to COVID-19. After earning his J.D., he plans to go into business law, with a focus on helping small businesses.