Daniel Wright’s job is online these days, but it was like that even before the COVID-19 pandemic. Otherwise, he would have a 1,400 mile commute across eight states.

Wright is a clerk for a judge in northwestern Minnesota while living in Raleigh, North Carolina.

“The job was posted specifically as a remote clerkship because I think the judges had found it hard to attract applicants to such a remote part of the state,” said Wright, who earned his law degree through Mitchell Hamline’s blended-learning option, allowing him to remain in North Carolina and keep working as he completed most of his studies online. “It didn’t specify whether the applicant had to be in state, so I took a chance. And the judge didn’t have a problem with it.” 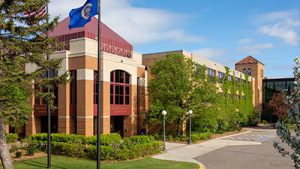 Wright is one of the 94.9 percent of Mitchell Hamline 2019 graduates who have found meaningful employment after law school, according to data compiled this spring. That’s the highest rate in the five years since Mitchell Hamline was created from the combination of its two legacy schools. That rate measured nearly 300 students who graduated between Sept. 1, 2018, and Aug. 31, 2019. It was 90% in the previous year.

Mitchell Hamline’s student population includes a significant number of established professionals who are earning a law degree to enhance or build upon an existing career–often through the blended-learning path. The school’s Class of 2019 includes graduates like Wright who are working in jobs that require bar passage as well as graduates who have found employment in positions where a J.D. is an advantage and other professional positions. Those pursuing an advanced degree full-time within 10 months of graduation are counted as well.

Providing an opportunity for graduates to earn their degree and begin building a law career in both traditional and emerging ways is part of the school’s mission, said Leanne Fuith, Mitchell Hamline’s dean for career and professional development. Many students come to Mitchell Hamline knowing they’ll have a job after graduation that doesn’t require a J.D. They want the J.D. for different reasons. “We have grads who go to big firms, but our grads also go so many other places,” she said.

Tolliver is vice chancellor for student affairs at the University of Illinois at Chicago. He was employed in that position when he enrolled in Mitchell Hamline’s blended-learning program, continued to work at his job throughout law school, and remains in it after graduating this spring, but with an enhanced credential and a broader set of skills. 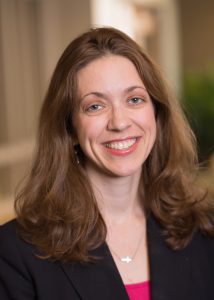 “There are so many ways that trained lawyers contribute meaningfully to our global and local communities, and that continues to be true in these historic times. It is a privilege to be able to prepare our graduates to do work that aligns with their individual goals and values,” Fuith said.

And like Daniel Wright, many of those Mitchell Hamline grads in judicial clerkships earned their J.D. through the blended-learning enrollment path and are clerking for judges across the country, from Pennsylvania to Alaska. The need for clerks in remote areas was a key example cited when Mitchell Hamline started blended learning five years ago.

Wright says his experience living and working in North Carolina while completing his law degree mostly online as a blended-learning student made him especially qualified to clerk remotely.

He listens to hearings remotely in near-real time and emails with Judge Anne Rasmusson over completing orders that come from the proceedings. He also reviews briefs, does legal research, and makes recommendations on pending motions.

Even when the COVID-19 pandemic goes away, Wright says, he’s content to keep working remotely for a Minnesota judge from North Carolina.

“The reason a clerkship was important to me was it validates the method by which we went to law school,” he said. Earning a law degree partly online might have seemed radical to some in the past, said Wright. “Maybe it’ll be more accepted now.”