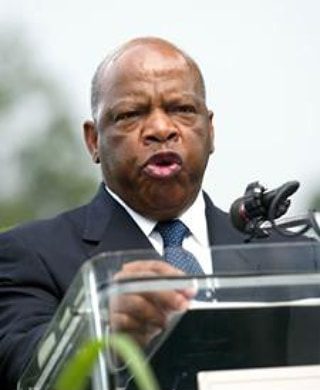 Mitchell Hamline School of Law and the country mourn the loss of Congressman John Lewis, an activist for social justice and civil and human rights.

Congressman Lewis’ life was an example of commitment and courage in the struggle for racial equality and justice in our country, and after 50 years of dedicated service, he received the nation’s highest civilian honor, the Presidential Medal of Freedom. He was born the son of a sharecropper in Alabama, and as a young boy, he attended Alabama’s segregated public schools. Congressman Lewis was admitted to Fisk University, a Historical Black College & University (HBCU), where he organized sit-ins at segregated lunch counters. During this time, he became a volunteer with the Freedom Riders, where he was beaten and jailed on numerous occasions for his participation. Congressman Lewis often said that Rev. Dr. Martin Luther King Jr. and the 1955 Montgomery bus boycott inspired him to become part of the Civil Rights Movement.

From 1963 to 1966, he served as the chair of the Student Non-Violent Coordinating Committee (SNCC), leading him to become a recognized national leader in the Civil Rights Movement. At the age of 23, he was named one of the keynote speakers for the famed March on Washington. Congressman Lewis had numerous accomplishments during his lifetime, serving on Atlanta’s City Council, as the U.S. Representative for the 5th District of Georgia, a member of the House Ways & Means Subcommittee, and the Income Security & Family Support Subcommittee. Congressman Lewis received over 50 honorary awards and degrees from many prestigious colleges and universities across the country.

Mitchell Hamline acknowledges the historic struggles for racial equality in America and vows to fight with the same passion to bring about freedom, equality, basic human rights, and justice to our community. The murder of George Floyd has spurred a more open conversation about race relations in our country. We dare say that people are now beginning to understand the struggles and the injustice our Black and Brown neighbors have endured. We can no longer stand idle, and in silence, while our community, neighbors, friends, and family face such uncertainty about the fairness of our justice system. As we work to bring about change in our community, we must understand the effects of structural and sustained racism. Regardless of our backgrounds or ideological differences, we must build a society that is seeking justice for all humankind. We must involve our students, staff, faculty, and clinical programs in the framework for creating an intentional and unwavering commitment to the legacy and efforts of Congressman Lewis.

Congressman Lewis was often called “one of the most courageous leaders of the Civil Rights Movement,” dedicating his life to protecting human rights, securing civil liberties, and working to building a “Beloved Community” in America. His dedication was directed with the highest ethical standards and moral principles that won him the admiration of his colleagues in the United States Congress.

In his last public appearance, he showed the love he had for the civil rights and equal justice movements by participating in a “Black Lives Matter” march. He believed this was one more step toward freedom and justice for all humankind. He is now serving with his new band of warriors. Please join us in honoring his life and legacy.

Previous Post:
Mitchell Hamline to teach completely online in fall 2020
Next Post:
Marking the 30th anniversary of the Americans with Disabilities Act