Three alums awarded for service to others 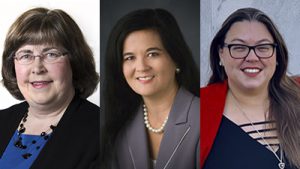 The Mitchell Hamline Alumni Association has announced its three alumni awards for 2020 will go to women who each help different underserved communities, and who do so in private practice, from within the government, and as the head of a nonprofit.

“These women work tirelessly for people who would otherwise have no access to legal services,” said alumni and donor relations officer Allison Burke ’09. “This is exactly the kind of service work Mitchell Hamline trains its students to focus on.”

The organization, with offices in Minneapolis, St. Cloud, and Willmar, assists people in 21 counties in central Minnesota. Lastine has worked in the legal aid community since graduating from William Mitchell College of Law in 1980. She was with several divisions of Mid-Minnesota Legal Aid before joining CMLS in 1997.

Lastine also has served on several boards, including two terms as co-chair of the Minnesota State Bar Association’s Access to Justice Committee, the MSBA Board of Governors from 1996-2012, and she was a longtime instructor for William Mitchell’s Trial Advocacy and Lawyering Skills programs. 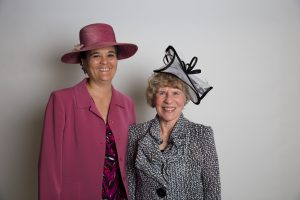 Jill Esch is the ombudsperson for American Indian families for the state of Minnesota. Her work includes investigating complaints for noncompliance of the Indian Child Welfare Act (ICWA), the Minnesota Indian Family Preservation Act (MIFPA), and several other laws and policies regarding American Indian families, especially those involved in the child protection system.

A Native Hawaiian, Esch worked for a small firm in Hawaii for 24 years before leaving the trade winds for polar vortexes to attend law school in Minnesota. In 2000, she won the first-ever Women in Law scholarship at William Mitchell. Esch is also a member of the Minnesota American Indian Bar Association, a co-chair since 2017 of the Children and Families chapter of the U.S. Ombudsman Association.

Specifically, the award focuses on an alum’s work for Mitchell Hamline. As former Dean Mark Gordon noted in nominating Esch, “Jill is always volunteering to do more for the school.

“She has worked diligently to recruit Native American students to MHSL, and she is a constant ambassador for us with students and the community.  Jill also lives the mission of the school in terms of her work with Native American and other diverse communities.”

Since graduating from law school, Mirella Ceja-Orozco has worked to help people navigate the complexities of immigration law. In nominating her for the award, classmate Sarah Erickson said Ceja-Orozco’s heart “is dedicated to serving those most in need.

“For example, in recent years when the federal government has taken a particularly harsh stance on undocumented immigrants, Ms. Ceja-Orozco spends time visiting detention centers to provide pro bono services to those in need.”

Originally from Northern California, Ceja-Orozco came to St. Paul to attend Hamline University School of Law and has remained. She worked in private practice and the Immigrant Law Center of Minnesota before joining Ojala-Barbour law firm in St. Paul. She also teaches at the University of Minnesota Law School.

“She is truly an attorney I aspire to be,” Erickson said of Ceja-Orozco. “She exemplifies the best of the legal community.”