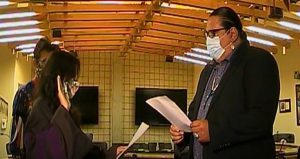 Mitchell Hamline professor Angelique EagleWoman spent Election Day making history – not by winning office but by entering it. Donning a mask with her 16-year old son nearby, EagleWoman swore the oath to become the newest associate justice on the Sisseton-Wahpeton Supreme Court of Appeals. The ceremony happened on the Lake Traverse Reservation in South Dakota.

In addition to her duties as a law professor and co-director of Mitchell Hamline’s Native American Law and Sovereignty Institute, EagleWoman has served as a tribal judge in other jurisdictions before. But this appointment was especially important, as she is the first member of her own tribe to sit on this court.

EagleWoman considers it the realization of a dream she didn’t know she could have when she was young. Growing up as a student in the reservation’s tribal school (Tiospa Zina), she aspired to be a lawyer. Elders would extol the need for judges, too, but the court she now sits on wasn’t created until 2014. “It’s an amazing honor to have that trust put in me – to use traditional teachings I grew up with and the legal education I’ve had to now sit on our highest court,” EagleWoman said. “I feel like a trailblazer and hope other Native women lawyers will serve on tribal courts because it’s important to continue to uphold and carry on our own legal traditions and our own ways of decision making.

“For over 100 years, our reservation legal systems have been dominated by external laws and people. I hope my example will encourage those few of us that do go to law school and become lawyers to see what an incredible contribution can be made within our own justice systems.”

Only decisions appealed directly from the tribal trial court go before the Court of Appeals, which also is referred to as the Supreme Court within the tribal government. Decisions set precedent for how Sisseton-Wahpeton Oyate tribal law is interpreted. 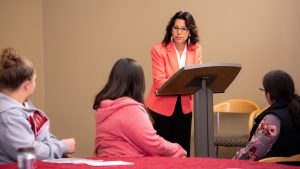 EagleWoman, whose Dakota name is Wambdi A. Was’teWinyan, will serve a four-year term alongside Chief Justice Thor Hoyte and Associate Justice John R. Murphy. She hopes her service will also help dispel another inequity.

“There’s an unfair perception by some outsiders that tribal judges or Native lawyers who are working within their own communities can’t be impartial. That somehow, American Indian law-trained people can’t be fair decision makers for their people.

“That perception really seems unfair to me, because we don’t see that same criticism applied to white judges sitting in judgment of white defendants or litigants. Hopefully my time on the court will help refute that.”

The court will hear cases at least monthly, though there might be times when the docket is empty. For EagleWoman, that work is in addition to being co-director of the institute and teaching several classes, including Contracts; Intro to Tribal Law; and a clinic that works with tribes to help draft statutes for their governments.

EagleWoman is also authoring a forthcoming law review article about the history of tribal courts. Long before European colonizer-settlers arrived, Indigenous peoples had governance and judicial systems. Dispute resolution processes were co-opted into U.S. law under the banner of “restorative justice,” though EagleWoman adds Native people aren’t always given the credit. In the early history of colonization and the United States, efforts focused on destroying Indigenous governance systems and culture. U.S.-appointed Indian agents on reservations saw to it that Native people were prosecuted for offenses like wearing their hair too long or objecting to their children being taken to boarding schools. Medicine men were imprisoned until they renounced their spirituality.

The Indian Reorganization Act of 1934 allowed tribes to write constitutions that included court systems. Those judicial systems have continued their transformation during the past generation by adding appellate courts – like the court EagleWoman now sits on.

“This is that next level where tribal court isn’t the final decision maker and there’s an ability to appeal,” she added. “That always brings greater legitimacy to any court system. It’s a review by three justices looking at the issue carefully and reviewing how tribal law was interpreted.

“I’m very pleased to be a part of that process and assisting in the continued implementation of our tribal law.”