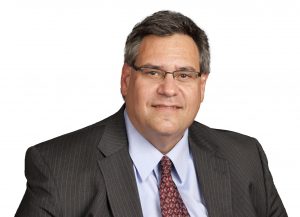 Thaddeus (Thad) Lightfoot, a well-respected and nationally known environmental lawyer who taught for many years at Mitchell Hamline School of Law, died unexpectedly on Monday, Dec. 14. He was 60 years old.

“Thad was one of those people I think of as honorary alums, people in the Twin Cities legal community who discover a second alma mater in our law school,” noted Professor Mehmet Konar-Steenberg, who is also the Taft Stettinius & Hollister/Xcel Energy Chair in Energy and Environmental Law.

“Here was this experienced practitioner, partner at major Twin Cities law firms, president of the bar association – yet he found time to teach our weekend courses, mentor our students, and help them with papers, whatever they needed.”

Lightfoot had been an adjunct professor at Mitchell Hamline since 2004 and was scheduled to teach Environmental Law next spring.

He spent nearly three decades practicing environmental law, representing corporate clients as well as governmental and other public entities as a partner at Dorsey & Whitney LLP. Before that, he founded the Environmental Law Group with three other lawyers in 2000.

As news of Lightfoot’s death spread through the Twin Cities legal community this week, many tributes focused on the extraordinary amount of time he gave that community. After sitting on the Minnesota State Bar Association board from 2010-16, he then served as Hennepin County Bar Association president from 2017-2018. Lightfoot also testified frequently at the Minnesota Capitol on proposed legislation. “He was a tireless author of scholarly articles and lecturer at seminars,” noted an internal announcement at Dorsey. “His commitment to pro bono work was also extraordinary over his career.”

Mitchell Hamline’s dean of career and professional development, Leanne Fuith, called Lightfoot “an outstanding attorney, a leader in the legal community, and a really special colleague.”

“We’re fortunate at Mitchell Hamline to have a tradition of high-level practitioners sharing what they know with our students,” added Konar-Steenberg. “Thad exemplified that.”

Lightfoot is survived by his wife, Susan, and his twin sons, Christopher and Daniel.