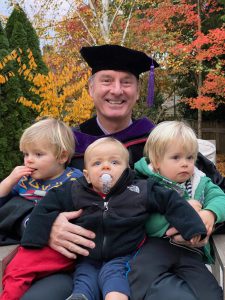 On Jan. 11, the day after Mitchell Hamline’s 2021 Winter Commencement, the Star Tribune newspaper published a feature on Bob Whitsitt, the oldest graduate in that ceremony.

Whitsitt, once the youngest general manager in the history of the National Basketball Association, told the newspaper he took on law school to challenge himself. He is one of 13 students age 60 and over to graduate from Mitchell Hamline in the last five years. More than half of those — like Whitsitt — attended through the blended-learning enrollment option, which allows students to remain where they live and attend school online for most of each semester, visiting campus for one or two intense sessions per semester. (With COVID-19, the on-campus portions have been suspended.)

Whitsitt, a Seattle resident, found the blended program’s design accommodated his heavy travel schedule as a business consultant and also allowed him to visit his mother in nearby Hudson, Wis., and other family members when he made his trips to campus.

Whitsitt summed up his law school experience in the title of a letter he wrote to family and friends after finishing his course work: “Never Too Late.”

Previous Post:
Mitchell Hamline dean joins 156 law deans in condemning attack at U.S. Capitol and efforts to overturn election
Next Post:
Where Will You Stand?