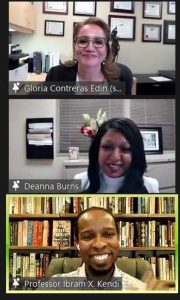 Historian and antiracist scholar Ibram X. Kendi called on Mitchell Hamline and other law schools to be at the center of antiracism work in the United States, during an online event Monday evening. The discussion, which drew more than 1,000 people, is believed to be the largest non-commencement event held at Mitchell Hamline or its legacy schools in recent memory.

“The crux of the solution will be law and policy,” Kendi said. “Those who are studying law who become policymakers will be in the forefront of creating an anti-racist society.”

Kendi is the author of six award-winning and bestselling books, including “How to be an Antiracist.” His latest work, which he co-edited, is “Four Hundred Souls,” a history of African America as told through the contributions of 90 leading Black voices.

Kendi focused during Monday evening’s event on the importance of knowing the history that got us to here.

As one example, he outlined the history behind the terms “color-blind” and “race neutral,” noting they were borne from racist pasts that many people who use the terms are not aware of.

The term “color-blind,” Kendi notes, came from Justice John Marshall Harlan’s lone dissent in the 1896 Plessy v. Ferguson ruling that upheld Jim Crow segregation laws. While Harlan laudably described the Constitution as “color-blind,” Kendi reminded attendees the justice also noted in the same dissent that “the white race deems itself to be the dominant race in this country. And so it is, in prestige, in achievements, in education, in wealth, and in power.”

“The concept of color-blind also came in the same section in which [Justice Harland] substantiated white supremacy,” Kendi said.

“What’s tragic is you had certain Americans who were able to convince other Americans that anti-racist policies would hurt white Americans because they were helping people of color. They convinced us it was a zero-sum game.”

The key to understanding this, Kendi continued, lies in the misguided practice of determining whether a policy is racist simply by the policy’s language rather than its outcomes: Never mind if the effect of the policy is to disproportionally hurt certain people; it’s only a racist policy if the language that establishes the policy is race-conscious, he said. “Those who substantiated the maintenance of racial inequality coined the term “race neutral” to legally assault those policies that targeted inequities.”

“You have so many folks and institutional leaders and everyday Americans for whom if we defined a policy as “racist” because it maintained inequities, they’d have to look at their own policies as racist.”

Kendi then pivoted to how schools can work to be antiracist, including centering work and curriculum on helping to address issues in the communities where campuses are located; addressing the student debt crisis in the country that might keep some people from even considering law school; and rethinking the place tests like the LSAT have in admitting students.

“We’ve been told the cradle of racism is ignorance and hate – that ignorant and hateful people have racist ideas and institute racist laws,” Kendi said. “I find in my research is it’s not hate at the core, it’s self-interest.”

“Out of economic or political self-interest, people in power enact racist laws, then they justify them through racist ideas. Too often people only think about what they’d lose if we fundamentally transformed this society, instead of what they’d gain.”

Last year, data from the American Bar Association found five percent of all lawyers in the U.S. are African American, an unchanged percentage from ten years ago. The entire country’s population is 13% African American.

“We have a role in this,” Niedwiecki said. “Schools aren’t doing enough to break down those barriers. Even if our own student bodies are getting more diverse, it’s not translating into a more diverse legal profession after law school.”

Niedwiecki lauded an effort by five black women law deans who started the Law Deans Antiracist Clearinghouse Project in 2020 to try to address such issues.

“It’s not enough to be committed to diversity and equity. We must also be actively antiracist.”