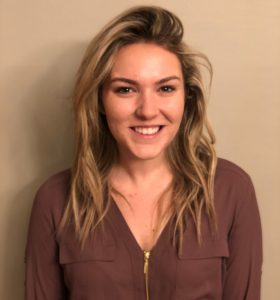 Mitchell Hamline student Laura Sweeney has been named a semifinalist for Law Student of the Year by National Jurist magazine. The publication took nominations from across the country and named one student of the year and six semifinalists; honorees are featured in the Spring 2021 issue.

Sweeney, a 3L who will soon graduate from Mitchell Hamline, has been on a law school journey that dates to March 2009, when she got to skip high school to go to a courtroom and watch her parents be sent to federal prison.

They had rigged cable TV boxes to give customers subscription channels for free – to the tune of several million lost dollars to cable companies.

It was the culmination of years of investigations (and at least one FBI raid) in which Sweeney was surrounded by the legal system. Through all of it, the 27-year-old from Ramsey, Minn. remembers the public defenders. “I remember my mom’s [public defender] giving my sister and brother and me money to get snacks at the café one day because a case was taking so long,” she remembers. “They were always keeping us in the loop, and I saw how they really do help people in such a trying time.”

Even with staggered sentences for her parents, Sweeney found herself staying with friends and sleeping some nights in her car. And when her parents were released, they struggled with reentry.

These experiences motivated Sweeney to pursue a law degree so she could spend her career in public defense and in helping people reentering society. To date, each of the five clients she’s worked with as a certified student attorney in Mitchell Hamline’s Reentry clinic has been granted judicial expungements. “I feel grateful to have been able to help them with something that will help them go out and find work or get into college,” Sweeney noted. “To me, that’s really what being a lawyer is all about.” 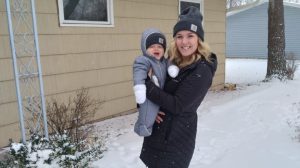 In addition, Sweeney is a clerk in the Dakota County (Minn.) Public Defender’s office. Other clinic work at Mitchell Hamline has included the Legal Assistance to Minnesota Prisoners (LAMP) clinic, where she helped a recently released mother modify her custody to allow her to see her son three days a week. As Sweeney attended the online hearing where the judge approved the change, her own newborn son, George, napped nearby. “I had just had a baby and couldn’t imagine not seeing him,” Sweeney remembers.

Sweeney’s work has also included helping offenders apply for medical release from Minnesota prisons during the COVID pandemic. She helped more than a dozen inmates apply, including eight pregnant offenders. State record-keeping makes it hard to know how many were released, though Sweeney continues to work with a client who’s suing the state for revoking a release that had been granted.

Finally, she was a student liaison for Mitchell Hamline’s award-winning Mobile Law Office, a modified RV that travels to communities to offer pro bono services.

As a new mom, Sweeney has had to navigate the demands of law school and motherhood. She often only can work when George sleeps and recalls once needing to feed him during a final exam.

“Even when she had bad news to deliver, Laura empowered her clients by explaining and demystifying the law,” said Reentry Clinic Director Jon Geffen. “That’s such a crucial skill for attorneys, and Laura has it in abundance.”

“She has represented her clients with great competence and tremendous grace.”

Previous Post:
One Step at a Time: A Life in the Law
Next Post:
Mitchell Hamline launches resource page for Chauvin trial