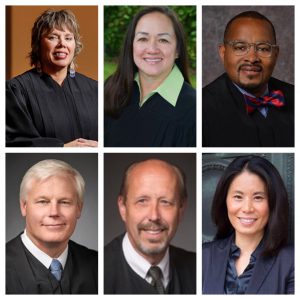 Six Minnesota judges, five of whom are alums of Mitchell Hamline, will be part of a conversation for current students on April 7th about judicial clerkships.

The event, which is co-sponsored by Mitchell Hamline School of Law, is called “Demystifying Judicial Clerkships: Everything You Ever Wanted to Know.”

The panel will be moderated by Judge Sophia Vuelo ’98 of the Second Judicial District and include:

Panelists will discuss the path toward becoming a Judicial Clerk and how to best prepare yourself to succeed as a Judicial Clerk; there will be an opportunity for small group discussion with the judges, as well.