In the nearly 20 years professor John Radsan has lived in Minnesota, he’s purposely never visited the northern town of Hibbing. He didn’t want it to be a visit on the way home from somewhere else. He wanted a pilgrimage. 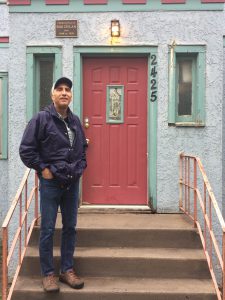 Professor John Radsan, in front of the house where Bob Dylan lived in Hibbing, Minn.

As a Bob Dylan superfan, Radsan needed just the right reason to visit the town where Dylan spent most of his youth. The singer’s 80th birthday fit the bill.

For Eric Rogers, most of his 1L constitutional law classes this past spring ended by spending a few extra minutes on Zoom, chatting with Radsan about music and, yes, Dylan. At one point, a fellow classmate urged Rogers to pick up his guitar and serenade the class with a Dylan song. Rogers played “Señor”.

So when Radsan told his class about Operation Hibbing – his trip to Hibbing and Duluth, the cities of Dylan’s youth – and invited anyone to join, Rogers was in.

“It ended up a great opportunity to get to know one of my professors – whom I had only met through Zoom – and bond over interests other than the law,” said Rogers, 34, who lives in St. Paul.

The two met in Hibbing on Sunday, May 23 (the day before Dylan’s birthday) to see the town’s historic high school; the home where he lived from age 7 to 18; and the spot where Dylan’s father owned a furniture store and where young Robert Zimmerman had his first job.

There had been a groundbreaking for a new Dylan monument the previous day. 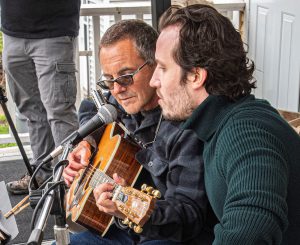 On Monday, Dylan’s actual birthday, they drove to Duluth to visit the first house Dylan ever called home. There was a small crowd throughout the day, along with organizers from the Duluth Dylan Fest who offered visitors cake and cupcakes. The two met other Dylan stans and heard stories about his time in northern Minnesota.

At one point, Rogers – who worked as a musician for several years after college – played a few songs on the Dylan house porch. A photograph of the moment made the front page of the Duluth News Tribune the following day.

By then, Radsan had headed back to the Twin Cities to teach a class. But he recalls “it was fun to find people more fanatical about a topic [Dylan] than me!

“And I really enjoyed experiencing the trip with a fellow Dylan traveler.”

“It seems Mitchell Hamline is the kind of place where something like this is possible,” added Rogers. “You’re able to reach your professors and have that access, which I appreciate.”