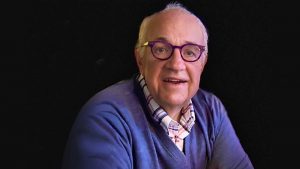 David Herr ‘78, a highly regarded appellate lawyer and complex case litigator who long mentored students and taught at Mitchell Hamline, died on Dec. 22, 2021, at the age of 71. He had been diagnosed with amyotrophic lateral sclerosis, or ALS.

“I already miss his wit, writings, and wisdom,” said Professor Roger Haydock, who knew Herr since his days as a law student in the 1970s, when he was instrumental in growing the William Mitchell Law Review during its early days. “He loved the law, his family, and Mitchell Hamline.”

A longtime partner at Maslon, Herr wrote more than 15 publications on Minnesota and federal law while also helping draft and amend rules that guide and govern how lawyers and judges in Minnesota adjudicate civil practice in the state.

“I imagine every courtroom in this state and every law firm in this state has books that David has written that lawyers rely on,” Haydock added, in an interview with Minnesota Lawyer. “There are maybe over 1.2 million lawyers in America, and most of them are litigators. A majority have used one or more of his books over the decades, so he’s got this remarkable legacy that way.”

Earlier in December, as Herr’s ALS progressed, Maslon hosted an online event to honor their partner who had worked at the firm for four decades. The event coincided with Mayor Melvin Carter proclaiming “David F. Herr Day” in the city of St. Paul, praising Herr for being “one of the most highly regarded appellate lawyers and complex case litigators in Minnesota.” Herr was a lifelong St. Paul resident.

Fellow Maslon partner Erica Holzer ‘13 moderated the event, which included a message from Gov. Tim Walz, who called Herr “a giant in the legal profession.”

Emeritus President and Dean Eric Janus, who led Mitchell Hamline predecessor William Mitchell College of Law, was among those offering tributes to Herr.

“David has long understood and advocated for the combination of practical and experiential approaches with academic rigor that is, in my opinion, at the core of the Mitchell Hamline approach to legal education,” said Janus.

“In addition, along with Professor Roger Haydock and others, David wrote scores of books on various aspects of practice that students the world over have read. David has exemplified, and led, in the idea that law practice can be taught – intentionally and rigorously – as opposed to leaving that aspect of the training for expert practice to chance.”

“It didn’t take long after I moved to Minnesota to learn how important David Herr has been to the legal profession here and how hard it is to sum up all of his contributions,” said President and Dean Anthony Niedwiecki. “We’re grateful for all he did for this school and for the example he set for our students of the kind of ever-giving attorneys we strive to graduate from Mitchell Hamline.”

In addition to his work at Maslon, Herr was a founder of the Minnesota Supreme Court Historical Society and a charter member and president of the Academy of Court Appointed Masters. He mentored students and colleagues his entire career and was an adjunct professor for many years at William Mitchell, then Mitchell Hamline, most recently teaching a course in 2015 and helping with advocacy courses in 2016 and 2019.

Minnesota Lawyer also named Herr earlier in December a 2021 Attorney of the Year for Outstanding Service to the Profession. A memorial is being planned this spring.

“On a professional level, no lawyer has had a more profound and lasting impact on Minnesota civil procedure law and on federal court and appellate practice over recent decades than David Herr,” added Haydock.

“On a personal level, there was no better friend, colleague, and partner than David. He was a consummate role model.”