Mama Sharon: The model of caring 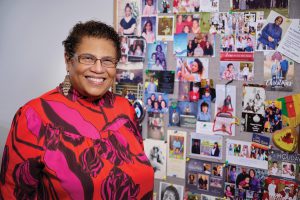 Sharon Van Leer, in front of the bulletin board in her office

You first notice the bulletin board inside Sharon Van Leer’s new office at Mitchell Hamline. Family photos include great-grandson and NBA rookie Jalen Suggs, along with some of the 36 foster children she’s raised. The remaining photos are of former students, though Van Leer quickly adds they also count as family.

“You’d be surprised how many I talk to every day,” she chuckles.

Chris Pham is on that board. The 2009 alum and Mitchell Hamline trustee stops to see “Mama Sharon” during every campus visit.

“There were times I felt like an outcast,” said Pham, who noted the school was much less racially diverse when he attended. Pham often studied, ate, or just hung out in Van Leer’s office. “Mama Sharon’s always been like a den mother, taking in students and being there to talk about law school or life.”

Now marking 30 years at Mitchell Hamline (and William Mitchell before that) Sharon Van Leer, 74, has been an influential part of many students’ lives.

Currently a director of DEI, Van Leer spent several years as a specialist for what was then the Office of Multicultural and International Inclusion. She joined William Mitchell in 1991 as an administrative assistant.

“She’s the model of caring,” said Michael Birchard, who as vice president of diversity, equity, and inclusion is Van Leer’s supervisor.

“When we talk about DEI, we sometimes forget the ‘B’ for ‘belonging.’ She makes students – many who come from families where law school is not a tradition – feel they belong.

“When there’s an obstacle – housing, transportation, or something else – she works tirelessly to find solutions.”

In some cases, she’s let students stay at her house until they can find a place – a generosity that doesn’t end at commencement. Shantel Thompson ’17 stayed with Van Leer when she took the bar this summer; Van Leer was one of her first calls in October to tell her she passed.

Sadly, Thompson was the victim of a random shooting attack just days later. Again, Van Leer was one of her first calls. “She’s a genuinely caring person,” said Thompson, from her hospital room. “I’ve seen her help so many people.” The two texted or talked most days following the attack.

“Sharon has an amazing ability to make a few calls and find whatever someone needs,” said Dean of Students Lynn LeMoine ‘11. “For many students, those resources can be the difference that allows them to remain in school.”

Her connections shouldn’t be a surprise. Van Leer’s office, complete with the candy bowl that attracts its own cadre of visitors, is blocks from where she grew up in St. Paul’s historically Black Rondo neighborhood.

Deeply involved in her AME church, Van Leer famously invited young people over for meals after services. That led to her becoming a licensed foster parent.

She now lives in Woodbury, Minnesota, where she was elected to a third term on the school board last November. She also serves on the commission that recommends judicial nominees to Minnesota’s governor, and another that investigates attorney ethics complaints in Hennepin County.

Even so, the connections aren’t always from her impressive Rolodex. When colleague Tina Scaramuzzo and Van Leer take walks, Van Leer often photographs buildings with “For Rent” signs – in case a student asks about housing near campus.

“She’s unapologetically who she is,” said Scaramuzzo. “That means sometimes bluntly telling you exactly how she feels, but it also means always going the extra mile for students.”

Van Leer’s office is also part of a new suite that includes student space for studying or just hanging out.

When a Mitchell Hamline administrator called Cedrick Frazier ‘07 this year, his first question was whether Mama Sharon was still there.

“Sharon Van Leer is the reason a lot of us stay connected to the law school,” said Frazier, now a Minnesota state representative. “She was the glue that held things together for a lot of us – someone to talk to in a new and unfamiliar environment.”

Fellow alum Adine Momoh ’09, an equity partner at Stinson, agrees. “For a law student, especially law students of color in Minnesota where there are not many who look like you and there are not many faculty or staff of color, being greeted by a warm, familiar face who genuinely cares and takes the time to ask how you are doing is important,” she said.

“It helps build a sense of community and security.”

Mitchell Hamline has ramped up work in recent years to be more inclusive and equitable. Faculty approved a resolution in February 2021 declaring the school’s work would be done with an antiracist lens. In the aftermath of George Floyd’s murder, the Dispute Resolution Institute convened several discussions – an effort called Truth and Action. Recent hiring has been more racially diverse, as well.

As DEI efforts expand, many employees and students have stepped up to lead them, but they are still rooted in Van Leer’s numerous examples of caring, according to Birchard.

“She’s taught us how to care,” he said. “And it’s our job to replicate that throughout the school.”

Van Leer credits Mitchell Hamline with better realizing the “unconscious bias we all have. The school is more willing to take a chance on a culture shift.

“I’m going to speak my truth as we do that. But for these students, the most important thing that resonates is feeling they have a place.

“They can come to me anytime.”