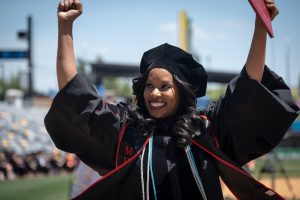 After Amber Goodwin ‘21 had spine surgery during law school, she felt relieved to be in Mitchell Hamline’s partially online blended-learning program, so she could complete assignments without sitting in a traditional classroom. But the program didn’t just let her do her work primarily at home in Texas; it created opportunities to meet a diverse cohort.

“There was a dentist, a professional dancer, and all these people with amazing life experiences who helped shape my viewpoints about what justice looked like,” said Goodwin.

Rejected from several law schools just after college, Goodwin opted for a career. Those life experiences, she says, provided the tools to drive her educational goals and eventually attend law school. With an impressive resume and vast experience in political organizing, gun violence prevention work, and as founder of the Community Justice Action Fund, she knew what she wanted personally and professionally.

“Both of my parents attended segregated schools,” said Goodwin. “The law has been something that has been out of reach for so many people because it was used against us almost our entire lives to separate us. I really wanted to be part of the two percent of Black women lawyers who are fighting gender, social, and racial justice. That’s why I tried law school.”

She continued her nonprofit work throughout law school, even testifying before Congress about gun violence prevention in 2019. She was elected Mitchell Hamline’s first Black Student Bar Association President for her final year in law school.

In the weeks before graduation, Goodwin posted a recollection of her path to law school graduation on a social media post that went viral, earning her attention from news organizations including “Good Morning America” and Newsweek.

Then, she was invited to the White House for a Rose Garden speech where President Biden announced several executive measures to try to curb gun violence.

Now a law clerk in the Travis County (Texas) District Attorney’s office, Goodwin wants more people of color represented in law school to foster change in laws that perpetuate biased systems. She mentors a group of formerly incarcerated Black women who want to attend law school and plans to work with Mitchell Hamline’s alumni association to create access for them.

“Many laws are still made specifically to oppress people of color and women,” said Goodwin, who recalls students being asked on day one of law school why they were there.

“I stood up and said, ‘I didn’t come to law school just to learn the law. I came here to change the law.’

“I still believe that.”

This article was written by Marla Khan-Schwartz, a freelance writer in the Twin Cities.