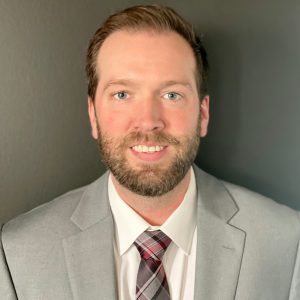 There was a moment of panic for Kirk Olimb ‘16 just before his first courtroom appearance as a junior associate.

His teeth fell out.

Specifically, the five-tooth bridge that filled the void from several front teeth lost during his years as a hockey player.

Thanks to thinking fast and staying calm under pressure – skills needed in both hockey and the law – Olimb got everything back in place long enough to give the opening statement in the case.

After a few years in the law after graduating from Mitchell Hamline, he then returned to the game he’d loved for so long. Olimb coached the Willmar WarHawks Junior Hockey Club for several years before being named earlier this spring as the new head coach of the Division III Concordia College Cobbers hockey team in Moorhead, Minn. It’s his first head coaching gig in the NCAA.

Olimb attended Warroad High School, near the Canadian border. There, the storied hockey team he played on won a state championship in 2005. But even with the success, he was shy in high school. That all changed when he headed to the under 21 juniors circuit, which often serves as a training ground for college hockey. The league includes staying with host families – billets – during the season. As those families opened their homes to players like Olimb, he gained confidence. 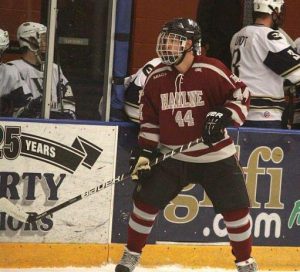 Kirk Olimb ‘16, as a player for Hamline University (undated photo)

After a few years playing juniors, Olimb joined the varsity hockey team at Hamline University. In 2011, the team won the program’s first-ever conference tournament title and advanced to the NCAA tournament quarterfinals.

During college, one of his mentors was Tim Ostroot, an athletic academic advisor and a 1987 Mitchell Hamline alum. The idea of law school soon emerged.

From the ice to the law and back

On his first day of law school, Olimb sat next to Amanda Swanson. They’d met previously, during undergraduate days, but soon became a law school couple at Michell Hamline. They married in 2019.

Olimb even brought his hockey know-how to law school. In the days before Mitchell Hamline’s 2015 combination, both William Mitchell and Hamline Law fielded teams that played against each other – usually to raise money for charity. The team mascot, Fighting Eelpouts, is a name bestowed on the school by former Gov. Jesse Ventura. As a student, Olimb played and was president of the Eelpouts (the eelpout is a slimy fish found in Minnesota lakes, often derided as ugly but beloved to its defenders).

Olimb also clerked with McEllistrem Fargione during law school and became an associate after graduation. There, Olimb gained experience not only in litigation but also in business development.

He enjoyed the work but “at one point, I was willing to accept and admit to myself that I didn’t want to do it for a career.”

Olimb continued at the firm part-time while exploring options. He served as an assistant coach for Hamline University before starting to look for full-time coaching gigs. He joined the Willmar team in 2019 as head coach.

Skills from law school and practice to help student-athletes

Now at Concordia, Olimb is excited to help his players not just on the ice but also as they plan their futures.

Although missing teeth might be a bit more common in this profession, Olimb is using the networking skills honed as a lawyer and the analysis and ability to spot issues that he learned in law school to build his team and connect with his players.

“My goal is to develop people and hockey players,” he said, noting that he’ll happily recommend law school to players if it seems the right fit. He’s also looking to them to encourage to think big.

“Don’t be afraid to do something different.”

This article was written by Suzi Morales, a freelance writer in New York City.