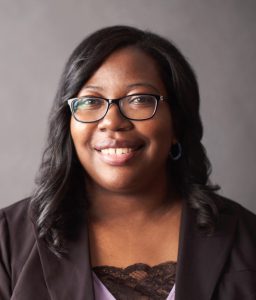 A 2006 Mitchell Hamline alum who also serves as a Minnesota state representative has been named the new CEO of the Planned Parenthood organization that covers five states, including Minnesota. Ruth Richardson will lead Planned Parenthood North Central States, which operates 28 health centers – as well as telehealth options – and serves more than 100,000 patients each year.

“Every patient, staff member, supporter, and volunteer has cemented Planned Parenthood as the largest provider of compassionate sexual and reproductive health care in our region, with fierce advocacy to fight for our rights and an extensive sex education program,” said Richardson, in a news release. “Our mission is more important than ever before.”

Richardson will be the first Black woman to lead Planned Parenthood North Central States and is also seeking re-election to the Minnesota House. After previously leading a non-profit organization – Wayside Recovery Center – that focused on mental health and substance abuse support, Richardson will oversee the healthcare operations of Planned Parenthood North Central States. She will not lead a separate organization that oversees political and lobbying work while she is in elective office.

Richardson assumes her new role in the months after the U.S. Supreme Court overturned the Roe v. Wade ruling that had guaranteed abortion access as a constitutionally-protected fundamental right; with the Dobbs ruling, states now have substantial freedom to restrict or even ban abortion altogether. Twelve states have banned the procedure so far and others have severely restricted it, though abortion remains legal in Minnesota.

“The new post-Roe world means that we can’t operate in the same way as we have for the last 50 years,” added Richardson. “We have to be focused on serving patients across our region, and serving people from states that have banned abortion, by thinking about access regionally.”

In an interview with MPR news, she added “reproductive justice and just the human right to health care is something that was really instilled in me as as a child, hearing the birthing stories of my mom and her sisters growing up in segregated Mississippi.”

Richardson has led several efforts as a legislator. In the weeks after George Floyd’s murder in 2020, her proposals to ban police warrior training, as well as to require autism training for law enforcement, were part of a deal that passed in Minnesota to make several changes in police use-of-force. She also authored and passed with bipartisan support a resolution that declares racism a statewide public health crisis.

In 2021, she authored a bill that became law to create the nation’s first government-funded task force to investigate the crisis of missing and murdered Black women, who are killed and die at rates disproportionately higher to women of most other ethnic groups.

Richardson says she was first drawn to addressing racist policies as a law student at William Mitchell College of Law in the mid-2000s, when she worked as a clerk for Mid-Minnesota Legal Aid.

The organization at the time was working to repeal the state’s vagrancy law, which made it a misdemeanor to loiter or beg for money, to be a commercial sex worker, and to be unemployed if you weren’t seeking employment. The law was repealed in 2005, a year before Richardson graduated from Mitchell.