Mitchell Hamline honors alums for their service and accomplishments 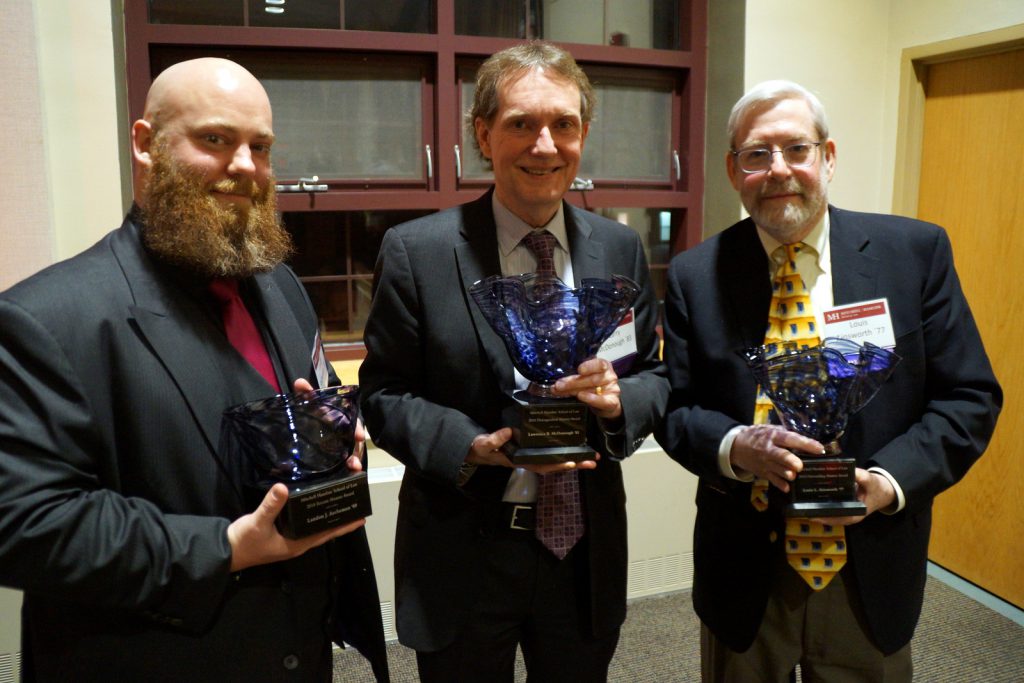 Mitchell Hamline honored three alums for their accomplishments and service to the law school during the 2018 Alumni Celebration on Tuesday, Feb. 6.

Professor Louis Ainsworth ’77 (WMCL) received the Outstanding Alumni Award for his deep commitment and extensive service to Mitchell Hamline. Ainsworth filled many leadership positions during his nine years on the school’s board of trustees. He is a founding member of the Center for Law and Business Advisory Board. Ainsworth served as director of CLB for many years, during which time he oversaw the addition of new courses and dramatically expanded the number of students enrolled in the certificate program. Ainsworth has provided generous financial support that has supported a number of scholarships and an innovation fund that created the Center for Law and Business and launched the Hybrid J.D. program. Recently he pledged to endow the first-ever Mitchell Hamline professorship in law and business.

At Mitchell Hamline, Ainsworth has served as a distinguished practitioner-in-residence, a student mentor, a field-supervising attorney for the apprenticeship program, a group leader for the school’s London program, and a commencement speaker.

Lawrence McDonough ’83 (WMCL) received the Distinguished Alumni Award for his professional accomplishments and demonstrating high ethical standards in his career. McDonough’s career has been devoted to helping the disadvantaged in our society through pro bono service and public interest work. He has taught at every law school in the state and has presented at conferences throughout the country. McDonough’s online manual “Residential Eviction Defense in Minnesota” is the most widely viewed manual on landlord-tenant law in Minnesota. His poverty law teaching website is used regularly by attorneys, law students, and advocates assisting people in need.

He began his legal career in 1983 at Mid-Minnesota Legal Aid in Little Falls, Minn., after becoming inspired by his experience as a student in a clinics course. He later became managing attorney of the MMLA Housing Unit. Over a 30-year career as a legal aid attorney, he was involved in hundreds of court cases and appeals as well as legislation, rule-making, and committee studies. His work has shaped

landlord-tenant and housing law in Minnesota and promoted availability of affordable housing. In 2013, after three decades at MMLA, McDonough joined the law firm of Dorsey & Whitney as pro bono counsel. He is part of a team that helps coordinate pro bono work performed by the firm’s attorneys.

Landon Ascheman ’09 (WMCL) received the Recent Alumni Award for his contributions to Mitchell Hamline and the community as a whole. Ascheman opened his own criminal defense law firm shortly after graduating and has been recognized by his peers as a Minnesota Rising Star in 2015, 2016, and 2017. He has been involved in the leadership of the Minnesota State Bar Association and both the Hennepin and Ramsey County Bar Foundations. He served on the MSBA and HCBA New Lawyers Section councils for several years and is the recipient of the 2016-2017 Outstanding New Lawyer of the Year award. Ascheman is current chair of the Criminal Law Section of both the RCBA and the HCBA and a board member of both. He is a council member of the MSBA Criminal Law section, a member of the Minnesota Bar Admissions Advisory Council, and a member of a Minnesota Supreme Court Advisory Committee.

He has also given back to Mitchell Hamline in many ways. Ascheman has volunteered with the school’s Self Help Clinic since 2011 and has mentored first-year students since 2010. He has served as an attorney judge for numerous client counseling/moot court competitions and has organized or been a presenter at several CLEs. Ascheman has also logged more than 350 pro bono hours in service to needy members of the community, and he helps third-graders and high-schoolers learn about the courts and the law.

Previous Post:
Register to attend the Alumni Celebration on Feb. 6
Next Post:
Nominate a 2018 graduate for an Award of Merit