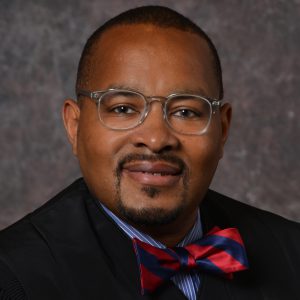 Harris: ‘Working with underserved people is a passion of mine’

By Sherri Hildebrandt
Growing up in public housing, receiving public benefits, his mother working as a teacher’s aide, JaPaul Harris ’03 (HUSL) didn’t know any lawyers—let alone judges—as a youngster in upstate New York. Now a district court judge in Minnesota’s Second Judicial District, Harris tries to be an example of what is possible for young people growing up in poverty.

“Working with underserved people is a passion of mine,” Harris says.

Early on, he anticipated playing a role in public service. “I thought I was going to be a teacher,” he recalls. But studying the law revealed to him an opportunity to help people struggling with issues involving—among other things—law enforcement, housing eviction, mental health, and poverty. “When I got into legal aid,” he said, referring to his work with Southern Minnesota Regional Legal Services, “I was sold. The way they became lawyers was by being lawyers. They were problem solvers.”

In addition to his legal aid work, Harris has also worked as an employee relations attorney with Minneapolis Public Schools and as a judicial referee in Hennepin County. In the referee role, he had the opportunity to work directly with teens, helping them make changes and pointing them toward services to help them move forward. The goal was “to effect a rapport with them by speaking plainly,” he said. “Kids have a good B.S. meter and know when you’re being straight with them.” Appointed to the bench in June 2018 by Gov. Mark Dayton, he currently presides over adult felony cases.

Harris’ nearly 20 years of work in the legal system, and the awards and honors he’s received, confirm that his work is making a difference. He was recently honored by Minnesota Lawyer magazine with a Diversity and Inclusion Award for his ongoing statewide work training court staffs in diversity and inclusion. In 2018, he received an Excellence Award from the Hennepin County Bar Association for Improving Access to Justice.

A self-described news junkie, Harris and his wife, Jana Kooren (whom he met when they both worked in the Hamline law library), have two children, ages 6 and 9.

He has coached football at the Jimmy Lee Recreation Center in St. Paul for 15 years, and just the mention of it puts a smile on his face. It’s another place where he believes he can make a difference. “I feel it’s important for young men who look like me to see me not only as a judge, or a lawyer, but as a person. When you don’t know something, you don’t know to reach for it. I want young men, particularly young black men, to see someone who has attained this position and to know—I was just like you.”

He keeps in touch with his players, too. “I coached one kid 12 years ago,” he says with a note of pride, “and now he’s coaching with me.”

Sherri Hildebrandt is a freelance editor and writer in St. Paul.

Previous Post:
See photos from the All Class Reunion
Next Post:
Judge Peter Reyes ’97 is committed to diversifying legal profession