Recent grad focuses on legal issues surrounding use of music 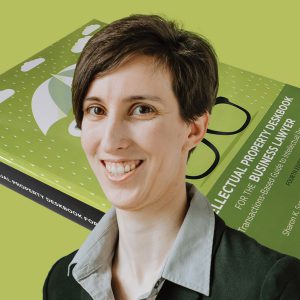 While still an undergrad, Alexandria (Alex) Mueller ’16 was a composer full of curiosity. Her music was starting to win competitions, with one resulting in a publishing deal.

When she received the contract about publication and performance rights, she wondered about how this system worked. Her composition professor at the University of Wisconsin-Stevens Point recommended she take her questions to a business law professor at the school. When that professor sensed the depth of Mueller’s interest in the ins and outs of intellectual property law, he suggested she consider law school.

It was a fortuitous move. Three years after graduating from Mitchell Hamline, Mueller is gaining a reputation as an authority in the area of music transactions. She wrote a chapter on the subject in the recently released 4th edition of the “Intellectual Property Deskbook for the Business Lawyer.” She’s also joined the Minneapolis firm of Hellmuth & Johnson in its Business & Corporate Law, Entertainment Law, and Intellectual Property practice groups, and she chairs the Minnesota State Bar Association Art and Entertainment Law Section.

At Mitchell Hamline, Mueller was mentored by Professor Sharon Sandeen, director of the school’s Intellectual Property Institute. “I started working with her during my second year of law school,” Mueller said. “I wanted to do an independent study on music transactions. What I wrote was for musicians, but she was the one who said, ‘I have an idea that you could write another version of this that’s geared toward lawyers.’”

It was that version that became the chapter in the “Deskbook.” In it, Mueller provides an overview of the legal issues related to the use of music by a business through an extended analogy of driving on a road. “To actually use the music road, you need permission in the form of a license. In the case of driver’s licenses, you need only obtain a single license from the state,” she writes. “This is not the case with music, chiefly because the music road is typically not owned by any one entity. Instead, you need a separate license to use each street on the music road.”

Mueller continues to compose. In addition to a piece premiered at her May 2016 Mitchell Hamline commencement, she has some film scores in the works. She also plays viola in the St. Paul Civic Symphony and the Boom Island String Quartet.

Rob Hubbard is a St. Paul-based freelance writer. He writes about music and the arts for the St. Paul Pioneer Press and is the author of a history of Minneapolis comedy theater Brave New Workshop.