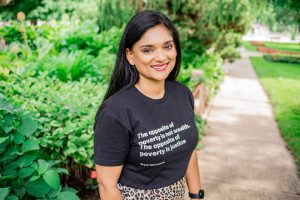 After a car accident left Taneeza Islam’s arm severely injured in 2005, withdrawing temporarily from Mitchell Hamline seemed to be the only option. But when Islam spoke with her professors about her plans, one stood out.

“Professor Marie Failinger looked at me and said, ‘Taneeza, we need you to come back, so do not think about not coming back,’” she said. “It just stuck with me.

“She is now a great mentor of mine.”

Islam did, in fact, return to Mitchell Hamline and graduated in 2007, starting her career in civil rights at the city of Minneapolis and eventually becoming civil rights director for the Council on American-Islamic Relations-Minnesota. During that time, Islam concentrated on expanding her national networks with other Muslim advocates striving to eliminate discrimination and Islamophobia.

In 2012, she moved for her spouse’s work to Sioux Falls, South Dakota, where Islam realized the area had few resources for immigrants and refugees. She applied for and won a Bush Fellowship in 2013 and used the money to assess access to legal services and started a two-year legal incubator pilot. She then launched a private immigration practice to serve clients pro bono. From there, she began focused outreach efforts.

“There were so many opportunities to organize and have positive energy in a conservative state,” Islam said. “We needed to do something. Using the models that I believe are impactful and infusing everything together while recognizing how conservative and rural it is here, we started South Dakota Voices for Peace.” 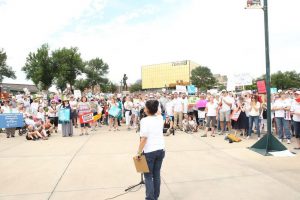 Islam co-founded S.D. Voices for Peace in 2017 along with its sister lobbying arm, S.D. Voices for Justice, where she led efforts to defeat 14 Islamophobic and anti-refugee bills at the state legislature.

She and her team tracked more than 36 Islamophobic events in the state from 2017-19. They provided support to community members and used media advocacy to discourage bias attacks. Recently, S.D. Voices for Peace raised $1.2 million for a Covid 19 emergency relief fund for immigrants and distributed cash assistance to 1,750 families.

In November 2019, S.D. Voices for Peace began offering free legal services to unaccompanied minors from Central America and to immigrant survivors of violence with support from Advocates of Human Rights in Minneapolis, where Islam was a student attorney.

With a diverse staff at S.D. Voices for Peace – mostly women of color – Islam’s goal is to not only offer culturally appropriate resources on the COVID-19 vaccine, voter advocacy, and other issues but to provide a comfortable space. “This first generation of refugee kids do not have a place where they can exhale and talk about their feelings,” said Islam.

“We are becoming that place.”

This article was written by Marla Khan-Schwartz, a public health and social worker and a writer in Minneapolis.