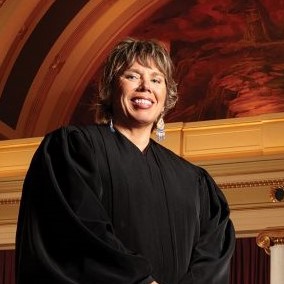 Minnesota Supreme Court Anne McKeig ’92 has been elected to the American Law Institute, a private and independent nonprofit that publishes materials that can be used throughout the legal system to better the administration of justice.

The organization’s publications – known as restatements, model codes, and principles – are not controlling law but have long been used as secondary sources to help attorneys and others in the legal system interpret laws and precedents.

McKeig was one of 60 new members elected this summer – and the only person elected from Minnesota. “I am humbled to be in a group of such distinguished minds, and I hope to be able to contribute something to the meaningful work of ALI,” she said, in a statement to Mitchell Hamline.

“Justice McKeig’s expertise during her career has helped courts and the legal profession rethink and reform how they handle such matters to ensure the law protects children,” said Mitchell Hamline President and Dean Anthony Niedwiecki, in nominating her to the ALI. The institute is currently working on a restatement that covers children and the law. “I can’t think of a better voice to have on your council as you bring that project to fruition,” he added.

She immediately joined the Hennepin County Attorney’s office, where she focused on child protection matters, especially those that fell under the provisions of the federal Indian Child Welfare Act. She was in court daily, working through adoption and ward matters, and she helped establish an ICWA social worker unit there. Justice McKeig’s work took her across the country to meet with tribal governments and work on policies and procedures that made Hennepin County’s method for addressing ICWA cases a national model.

When she was appointed a Hennepin County district court judge, Judge McKeig continued her focus on child protection matters. She led an application process for a federal grant to allow the court to take part in a project (Family Court Enhancement Project) focused on improving custody and visitation decision-making for families who experience domestic violence. The county was awarded a $400,000 grant in 2013, a few months into Judge McKeig’s three-year tenure as presiding judge

Justice McKeig has also brought her expertise on child protection and ICWA to the classroom as an adjunct professor. She has taught summer courses on ICWA and child protection proceedings the past two summers.

“Justice McKeig has been a tribal judge, a district court judge, and a state Supreme Court justice,” added Niedwiecki. “But to our students, she’s also been an approachable instructor who is helping our future lawyers keep both children and tribal communities in mind as they begin their careers.

“Our school also works hard to instill in our students a need to serve the public, and Anne McKeig fits that mold perfectly.”