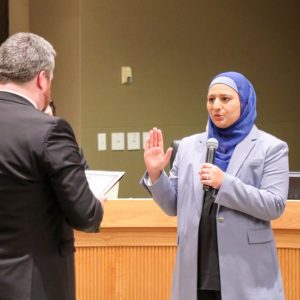 Lori Saroya ’13 made history this month when she was sworn in as the first woman of color and the first Muslim person to serve on the city council in her hometown.

Saroya, 41, won a special election in November to represent for the next two years the First Ward in Blaine, Minn., a community of about 71,000 people. She had previously served on the city’s Charter Commission and told the Minneapolis Star Tribune she wasn’t totally sure about running for the council last year. “Wearing a scarf, being a woman of color, I wondered if being elected was realistic,” she said, adding there were Islamophobic messages and attacks throughout the campaign. “Those comments motivated me,” she told the newspaper. “Let me prove them wrong.”

During her career in nonprofit work, Saroya has served on the board of the Minnesota Council of Nonprofits, as well as Mitchell Hamline’s alumni board. She was the first person in her family to attend law school.

“I would not have succeeded at Mitchell Hamline without my colleagues and professors, who genuinely care and want to see you succeed,” she said. “It’s amazing to have people who believe in you and continue to support you a decade after you leave their classroom.

“That’s what makes Mitchell Hamline so special and unique.”