Judge Becky Thorson ’95 currently serves as a U.S. Magistrate Judge in the Minnesota U.S. District Court. Prior to this, she was a partner at Robins, Kaplan, Miller & Ciresi. Before that she was a partner at Greene Espel. She has served on the Mitchell Hamline Board of Trustees since 2013. 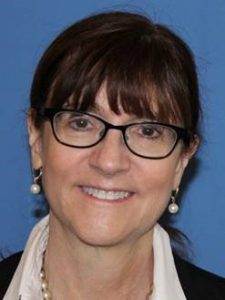 After working for several years as a manager at a computer graphics communications company, Thorson became interested in intellectual property law because of the emerging visual and audio technologies in computer graphics. Thorson needed to work full time to support her family, so she chose to attend William Mitchell (a predecessor school to Mitchell Hamline) because of its part-time evening enrollment option.

During her first semester of law school in the early 1990s, Thorson connected with Professor John Sonsteng and several local lawyers about using graphics during a trial. “After working with advertising agencies and corporate communications departments, I was surprised to learn that trial lawyers were not using basic graphics to educate and persuade a judge or jury,” said Thorson. “One thing led to another and I began creating trial graphics for lawyers. I watched a well-known trial lawyer, Harry Sieben, use my graphics—including a computer animation—at trial. I was hooked. I wanted to become a trial lawyer.”

While working with Professor Mike Steenson on a long paper, he introduced her to lawyers at Greene Espel. She became the firm’s full-time law clerk in 1994 and then an associate after graduation. In 2001, she moved to Robins, Kaplan, Miller & Ciresi to develop a national practice in patent litigation. At Robins, she represented both plaintiffs and defendants and appeared in courts throughout the United States. She took discovery in Japan, Finland, and the United Kingdom.

In 2005, Thorson was appointed to the District of Minnesota’s Patent Advisory Committee. She also served on the Court’s Federal Practice Committee from 2008 until she was appointed to the federal bench as a U.S. Magistrate Judge in 2014. In addition, as a past president of the Federal Bar Association, Minnesota Chapter, she helped found the Chapter’s Intellectual Property Practice Group.

As a U.S. Magistrate Judge, she has a broad range of cases on her docket, including patent, copyright, trademark, and trade secret cases. She also continues to serve on Mitchell Hamline’s Board of Trustees and its Intellectual Property Advisory Board. As a judge, she has participated in many judicial programs on intellectual property hosted in the U.S. and abroad in Ukraine, Georgia, Kazakhstan, and Uzbekistan. She is a member of the Jimmie V. Reyna Intellectual Property Inn of Court.

As a final note to future students interested in patent law, Thorson shared, “Patent litigation might sound boring, but it is not! Patents are about inventions—innovation. Litigation is often high stakes, sometimes ‘bet the company.’ The lawyers practicing in this area are usually very good. The law is ever changing and intellectually challenging at every stage of the case. And resolution of intellectual property disputes often involves complex business negotiations. And do not forget—the granting of rights to inventors for their discoveries is right in the Constitution. Look for it in Article 1, Section 8.”