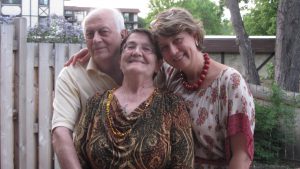 Mircea Toma was a self-taught engineer and computer aficionado who was constantly tinkering and thinking of new ideas and inventions.

“I don’t think he thought of himself as an inventor,” said Toma’s daughter, Anca. “I think he invented because he wanted to. His mind was going, and it was keeping him busy, and the ideas just came.”

One idea was developing a way for high-speed trains to let passengers board and disembark without the train stopping. In short, a second high-speed shuttle would travel alongside and connect with the train. Then, a moveable cabin would transfer to the shuttle, which would then decouple and deliver passengers to the station.

“He once said ‘imagine how much faster train travel would be if the trains were very rapid and never had to stop,’” said Anca. “Going from St. Paul to Chicago wouldn’t be a big deal at all.”

Toma never had the money for attorneys to secure patents for his inventions. But he read about a clinic at Mitchell Hamline where students get the opportunity to try their hand at real life client representation under the supervision of licensed patent attorneys.

Toma contacted Jay Erstling, the then-director of the clinic who is now an emeritus professor. 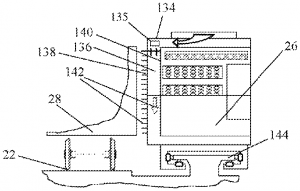 An image from Mircea Toma’s patent

“What impressed me most about Mircea was his intelligence, his command of the technology, and his passion about his invention,” said Erstling. “We knew that any student attorney who got to work with Mircea would have an excellent and enriching learning experience.

“We also sensed that obtaining a patent for Mircea was going to be somewhat challenging given the technology and the prior art, but we were convinced that taking on those challenges was well worth it.”

Brett Klein ’07 and Jim Swendsen ‘10, both adjuncts who worked with Erstling at the time and now run the patent side of the clinic, worked with students to prepare and file Toma’s patent application.

“As patent attorneys, we gather information from inventors and put that to paper,” said Klein. “But early on, several students struggled to wrap their head around the parts and pieces of his invention.

“The nature and sophistication of the invention grabbed my attention as something we might not normally see from a sole inventor, so the wait to hear from the patent office after filing the application was a bit more eager than normal.”

Toma applied for the patent in April 2016. The process is slow, and Toma was still waiting to hear if the US Patent Office would approve the application when he died unexpectedly in May 2019 at the age of 78. 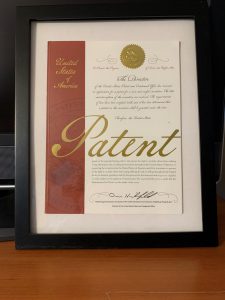 A framed copy of the patent, as presented to Toma’s family (courtesy Anca Toma)

Klein and the clinic kept working to see the process through, so Toma’s wife and daughter would at least have the patent. On March 2, 2021 – nearly five years after filing the application – the patent was granted. “We’re delighted that Mircea’s family will have this to help remember him,” added Klein.

Several students worked on the patent in various roles during recent years. Zach Zadow was a late entry; his work ended up being informing Toma’s family the good news and to make sure the official patent was delivered. Even with a limited role, the experience inspired Zadow. “It shows just how impactful our IP clinic is,” he said. “It’s an honor to work with inventors like Mircea and ensure that people’s great ideas see the light of day.”

The patent is a cap to the legacy of Toma, a self-taught man raised by his deaf grandmother in communist Romania. His mother died when he was young, and his father was imprisoned by the Ceaușescu regime.

Toma attended college to become an engineer and briefly practiced as one before moving to computers. This was in the 1970s and, after a six-month course, he was considered a trailblazer in the emerging world of computers in Romania at the time. When the world opened to Romania following the country’s 1989 revolution, Toma used some money from the sale of a house to buy what would be one of the few personal PCs in the country.

After daughter Anca immigrated to the United States to be a physician, Toma and his wife eventually followed, permanently moving to St. Paul in 2011. He continued his lifelong passion with computers.

“He had an earlier project with computers and translation that was his first attempt to patent something,” recalled Anca. “But he had difficulty translating ideas into English and getting people to help him, so he never finished that one.

“I’m glad he was able to connect with Mitchell Hamline to get this one patent in his name.”

With his death, Anca thinks of all her father’s memories and ideas that are now lost. She recalls him always discussing his latest idea but that her mother and she rarely were able to follow the intricate details.

“He was a very smart guy, and I don’t think a lot of us understood much of what he was doing,” she said. “He couldn’t explain very well but he had a very good mind and a lot of ideas.

“He liked to keep his brain busy, and people always admired him for that.”