The Role of the Census in the 2020 Elections

Article I, Section II of the U.S. Constitution mandates that Congress shall undertake a decennial census for the purposes of ascertaining population and the apportionment of congressional seats across the states.[1] While every state is entitled to at least one seat in the U.S. House of Representatives, regardless of population, additional seats are awarded based on a per capita or population basis.[2]  Oftentimes, individuals do not think of a census having a direct effect on elections, but it does. This blog briefly notes the role of the 2010 Census on the 2020 elections and analyzes the impact of the 2020 Census moving forward. The 2020 elections, especially the presidential election, will continue to be impacted by the results of the 2010 Census and subsequent 2011-2012 redistricting. Additionally, the 2020 Census will have bearings on future presidential and congressional elections that will test the continued viability, fairness, and legitimacy of the Electoral College and congressional representation. 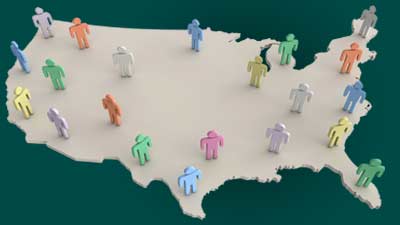 Requirements for the Census

The U.S. census is a constitutionally mandated procedure that is significant for many reasons.[3]  At its most basic level, a fair census is needed simply to determine how many people there are in the United States and where they live.[4]  Second, an adequate census, especially with information on demographics, provides an important statistical snapshot of the population that can be used for planning purposes, such as health[5] and retirement planning.[6]  Third, census data is important for the allocation of federal and state money because Congress often distributes public dollars on a per capita basis.[7]

The census also impacts state power during presidential elections.  States are given the authority to select the president of the United States through the Electoral College.  States are allocated a number of electors equal to the size of their congressional delegation.[8]  With the number of electors presently capped at 538 (and the total number of U.S. House members limited to 435),[9] as populations of one state change compared to others, so does the relative electoral power or influence. The strength of each state within the Electoral College varies, with several states possessing the minimum of three electoral votes, such as North Dakota and Wyoming, to California with 55 electoral votes.[10]

While the census does influence the size of a state’s U.S. House delegation and strength in the Electoral College, the census also has other electoral consequences.  The population distribution across states has a major impact in terms of how specific congressional seats, state legislative seats, and other seats are drawn.[11]  For much of the twentieth century, states refused to redraw these political seats based on demographic and population changes, resulting in rural areas benefitting from more representation than they should have been allocated.[12]

The Supreme Court initially ruled that the issue of reapportionment was a non-justiciable political question.[13] However, the Supreme Court later ruled in a series of cases that congressional, state legislative, and many local seats had to be drawn to reflect a one person, one vote standard.[14]  The Court has ruled that the allocation of congressional seats within a state must be mathematically equal,[15] whereas state and local seats require a less rigorous standard.[16]  The Court has also ruled that race may not be used for discriminatory purposes when districting,[17] but may be considered in some instances in order to promote minority voting rights.[18]  Finally, after some initial suggestion that the use of partisanship might be an illegitimate factor in making districting decisions,[19] the Supreme Court declared that such matters are non-justiciable in the federal courts,[20] even if state judiciaries have reached contrary conclusions.[21]

The Census and the 2020 Election

Swing States and the Electoral College

The 2020 presidential election is effectively over in 44 states and the District of Columbia[22] because of the swing state phenomena.  As a result of the Electoral College, presidential elections are 50 separate state elections plus the District of Columbia.[23]  In 48 of those states—with Nebraska and Maine being the exception—electoral votes are allocated by states on an all or nothing basis.[24]  This means that the presidential candidate who receives the plurality of the popular vote in that state receives all of that state’s electoral votes.  Because of the political geography of states, voting patterns, and partisanship,[25] the likely presidential vote outcomes in the vast majority of states is predictable.  In 2016 the number of swing states[26] was between 10 and 12 states.[27]  In the 2020 election, the number will be fewer.

Based on recent elections, voting patterns, and polling, a Democratic Party candidate for president is nearly certain to win California, Colorado, Connecticut, Delaware, the District of Columbia, Hawaii, Illinois, Maine (the overall state), Maryland, Massachusetts, Nevada, New Hampshire, New Jersey, New Mexico, New York, Oregon, Rhode Island, Vermont, Virginia, and Washington.  This is a total of 19 states plus the District of Columbia.  Democrats will probably win Maine overall and win three of the state’s four electoral votes.  The other electoral vote, which is for the Second Congressional District, will likely go to the Republicans.  At this point, Democrats would start with 222 electoral votes.

Yet there are six remaining states – Florida, Michigan, Minnesota, North Carolina, Pennsylvania, and Wisconsin–which comprise 100 electoral votes. These swing states are too close to call and they will decide the presidency.

Aside from Minnesota,[28] these states have swung back and forth between Republican and Democratic Party presidential candidates over the last four elections.  Head-to-head surveys of Trump versus Biden, Sanders, Buttigieg, and Warren indicate that these states will be competitive.  However, even among these six states, we can guess what they may do.  Trump almost won Minnesota in 2016 and he is targeting Minnesota in 2020.  Yet Trump is losing by double-digit numbers to any likely Democratic candidate, indicating an unlikely Trump win in Minnesota.[29]  In Michigan, several Democrats have a statistical lead.[30]  If Minnesota and Michigan vote for Democrats, this provides Democrats an additional 26 electoral votes,[31] bringing the total electoral votes for Democrats to 248.

While recent polls indicate that Biden has a slight lead in Florida[32] and North Carolina,[33] (Warren and Sanders are effectively tied with Trump), it is often tough for Democrats to win these states.  These states have large white working-class populations who are loyal Trump supporters.[34]

This leaves Pennsylvania’s 20 and Wisconsin’s 10 electoral votes, which will determine the 2020 election.  As of now, the only Democratic candidate who has a statistically significant lead over Donald Trump in Pennsylvania is Scranton’s own Joe Biden.[35]  Assuming that Biden is the nominee, Democrats would win Pennsylvania, but remain short two electoral votes.

This leaves the state of Wisconsin.  Biden is the only Democrat with a statistical lead over Trump in the Badger State.[36]  Wisconsin has a high percentage of white working-class voters.[37] Wisconsin voter motivation post-impeachment, the devotion of Democratic resources dedicated to win or hold other Midwest states like Minnesota or Michigan, and the possible purge of voter registration names[38] are all factors that make the outcome of Wisconsin’s electoral votes hard to predict, as is the final Electoral College.

The point of the Electoral College swing state scenario is to demonstrate how the 2010 census will impact the 2020 presidential election.  The population figures and the 2010 Census count will impact the electoral weight of states in 2020, thereby influencing the campaign strategy of presidential candidates.  After the 2020 Census, population shifts will require a reallocation of congressional seats and therefore affect the electoral strength of states again.

Another way the 2010 Census impacts the electoral vote is demonstrated by a candidate’s ability to lose the popular vote and win the Electoral College. This happened most recently in 2016, but also in 2000.[39]  The 2010 Census was arguably accurate but allowed for Trump to win the 2016 presidency despite losing the popular vote.  This could happen again in 2020.  The census allocation of electoral votes with the guarantee of each state receiving a minimum of three votes regardless of population allows for this possibility, and as state populations shrink and grow, this popular vote-electoral vote schism will not only persist, but perhaps grow.

Should a scenario play out where the next president wins the electoral college but loses the popular vote?  Already, a majority of the public supports direct popular vote for the president.[40]  Additionally, some have argued that the formula for the allocation of electoral votes favors small states, giving them disproportionate influence in the selection of the president.  While the principle of one person, one vote does not apply to the Electoral College and the Supreme Court has rejected such a challenge,[41] a census that provides an accurate population count but nonetheless favors certain interests or distorts votes perhaps further questions the legitimacy of the current system for selecting the president.[42]

State and Congressional Elections and the 2021 Redistricting

Assume in the 2020 election that there are some electors who did not vote in accordance with their state’s popular vote (which happened as recently as 2016), or that Democrats do win Maine’s Second Congressional District or win one of Nebraska’s electoral votes as they did in  2008.  All of these scenarios  might constitute a swing of one vote. This then makes the electoral vote 269-269 with no majority. This then means, according to the Constitution, that the U.S. House elected in 2020, whose distribution of seats is still based on the 2010 Census, will pick the next president, with each state getting one vote.  In 2020, the current U.S. House Republicans hold a 26-24 state delegation edge.  Republicans control a majority of the states despite the fact that Democrats have majority control of the U.S. House  If Democrats continue to hold a numerical majority of seats in the House but Republicans control a majority of the delegations, Trump might still win the presidency.  The battle for partisan control of state congressional delegations remains important.

The 2010 Census will continue to impact the 2020 elections, as well as provide the context for events such as redistricting that will then impact American politics until the end of the decade. The accuracy of the 2010 Census was critical to allocation of seats and electoral votes for the last decade and into 2020.  But this accuracy raises different problems: some states continue to grow, while others, especially in the Midwest shrink or fail to grow as quickly.  This creates severe and uneven balances among states and the relative strength of voters in those states.  Regarding presidential elections, which guarantee a minimum of three electoral votes to every state regardless of population, it raises concerns about distorting the popular will or giving voters in some states more say than others.  For some critics this imbalance is not democratic,[47] while for others, it is a way to balance majority rule and minority rights.[48]  Additionally, the growing gap in electoral weight for voters across big and small states raises a potential one person one vote issue.  However, as seen in the past, one person one vote is not justiciable in the federal courts.  Nor can one claim that the original constitutional design of guaranteeing each state one U.S. House member and two members of the U.S. Senate, regardless of population, is a constitutional violation.  A fair census that reveals an accurate picture of where people live in the United States might exacerbate state representational distortions that already exist, which may worsen in 2020 and beyond.

[26] A swing state is “a U.S. state in which Republican and Democratic candidates have similar levels of support and which is considered to play a key role in the outcome of presidential elections.” Merriam-Webster, https://www.merriam-webster.com/dictionary/swing%20state (last visited Jan. 24, 2020).

Previous Post:
Life After Smokestacks: Power Plant Host Communities Brace for the Clean Energy Future
Next Post:
Mining the Iron Range: What If Economic Growth and Environmental Responsibility Could Co-Exist?