Mining the Iron Range: What If Economic Growth and Environmental Responsibility Could Co-Exist?

The future of mining on the Iron Range has taken a couple of hits in the last month. At the end of December, at the behest of Ramsey County Congresswoman Betty McCollum and environmental activists, a federal spending bill gave the State Department 60 days for another review of the potential effects of Twin Metals’ proposed copper-nickel mine in the Boundary Waters Canoe Area Wilderness.

A few days before that, a federal judge in Washington, D.C. heard arguments in a lawsuit over the Twin Metals mine filed by a handful of businesses and environmental groups. President Trump reinstated two leases for Twin Metals that President Obama had previously denied; the current lawsuit seeks to invalidate those leases once again. A ruling could come down any day. 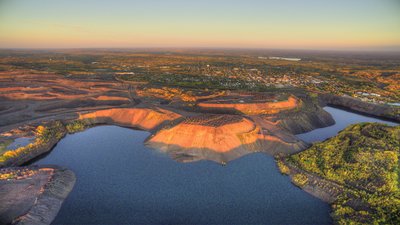 And on January 14, the Minnesota Court of Appeals reversed three permits held by PolyMet Mining Corp for a copper-nickel mine, sending them back to the Department of Natural Resources for an additional hearing. Again, the ruling was hailed as a victory for environmental groups.

For desperate residents of Minnesota’s Iron Ranges, the delays have become a common occurrence. Frustrating, but common.

Companies looking to build copper-nickel mines in northern Minnesota carefully follow rigorous instructions and jump through countless hoops, yet every time they think they see the finish line, the rug gets pulled out from under them.

For a century and a half, mining at the state’s three Iron Ranges – Cuyuna, Mesabi, and Vermillion — has been the backbone of northern Minnesota’s economy. When you hear the phrase “Iron Range”, you probably think of the Mesabi Range. Discovered in the 1860s, it’s the state’s largest, stretching about 110 miles across Itasca and St. Louis Counties. It includes notable mining towns like Grand Rapids, Hibbing, and Chisholm.

At first, iron ore was the object of everyone’s affection. The ore mined in northern Minnesota fueled our industrial age. Production of iron ore was dominant for about 100 years, but when supplies began to run short, the industry then figured out how to extract and process taconite, which is just a low-grade iron ore that was previously considered waste rock. This revolution saved the mining industry in Minnesota.

Now, attention is shifting toward copper and nickel, of which Minnesota has some of the largest undeveloped deposits in the entire world. These resources are found in countless everyday products, like pipes in your house, roofing material, hospital and kitchen equipment, aircraft parts, and the components you find in your iPhones, iPads, and MacBooks. This is to say nothing of its applications for the green economy, like materials for solar panels, battery storage, and electric cars– each of which we will need a lot more of as we make the transition into a carbon free future.

I live in a rural area between Hinckley and Pine City. My area is not a part of the Iron Range, but people in my district understand their struggles, and recognize that a strong mining economy will help the entire region.

Often, though, we feel demonized for our support of mining, as if a person can only care about mining or the outdoors – but certainly not both.

Look, there’s a reason that we live where we do. We love the outdoors. We love the Boundary Waters. We love four wheeling, fishing, hunting, camping, and snowmobiling all over Minnesota. Most of us grew up in the outdoors; it’s a heritage that runs deep in our blood. We absolutely do not want to jeopardize any of that, and we certainly don’t want our water to become toxic or animals to be harmed. We have a duty to be good stewards of the land while we are here, and nobody disputes that.

But we also understand the important role that mining plays in both the regional and state economy – a role that is often overlooked by people who live in the Twin Cities. However, those of us that live in and represent Range towns  (and similar areas) understand the importance mining plays. These officials don’t wish any harm on the communities they call home, but they do recognize the outsized influence mining has on the economy.

In the Twin Cities metro, there are plenty of jobs available that can support a family. Go on indeed.com and there are pages and pages of job opportunities. But up in northern Minnesota, those opportunities are harder to come by. In fact, 57% of the Range’s workers make less than $40,000 per year, and almost a quarter earn less than $15,000.[1] Make no mistake – it has been getting better, especially as fields like health care, social assistance, and retail continue to expand. But mining continues to be the cornerstone.

Mining jobs have the power to dramatically change Iron Range families’ lives and the communities in which they live.  The benefits extend to the entire region and state. Conservative estimates from the nonpartisan think tank Center of the American Experiment show that copper-nickel mining could generate a $5.9 billion annual windfall for Minnesota, as well as create almost 5,000 mining jobs and support 15,000 additional jobs in the region.

President Trump made a promise to get the range going again. One of the reasons we appreciate him so much is that he kept his word. Over the last few years, the range has seen a resurgence in taconite mining. Unemployment has fallen, and mines are running at full or near-full capacity. In addition, The Iron Range Resources and Rehabilitation Board (IRRRB) estimates that for every mining job three additional non-mining jobs are created. Proving, yet again, that mining success spills into other industries.

The Twin Metals and PolyMet projects are some of the most scrutinized industrial projects our state has ever seen. Twin Metals has been conducting strict environmental study for seven years, while all of PolyMet’s permits meet or exceed federal requirements. State experts have regularly come to the same conclusions: these projects pose no danger to public health or the wilderness that we cherish.

What many people don’t realize is that there is already a track record of copper-nickel mining success in our region. The Eagle Mine in Michigan began operations in 2014 and is expected to have an eight-year life span. Eagle conducts strict water treatment processes, and their particulate emissions are half of what was originally granted by their air quality permit. In addition, Eagle funds an independent, community-driven monitoring process to guarantee full transparency and accountability in their environmental performance.

The Flambeau Mine, which was an open-pit copper and gold mine in Wisconsin, began operating in July of 1991 and had completed all reclamation activities by the end of the century. Officials closely monitored the mine during its lifespan for potential environmental hazards, including groundwater, air quality, and impacts on wetlands and aquatic ecology. According to the Wisconsin Department of Natural Resources;

“Throughout the life of the project, the company has remained in substantial compliance with all permit conditions and applicable standards. Air monitoring indicated several exceedances of suspended particulate limits, only one of which was attributed to activities on the mining site: dust from a delivery of an uncovered load of crushed limestone. There were no exceedances of any effluent (treated wastewater) limits during the period of discharge. Monitoring of water quality and other characteristics in the Flambeau River similarly did not show any impacts from the effluent discharge. . . [and] [m]onitoring results have indicated that groundwater levels have nearly returned to pre-mining conditions.”

It is perfectly reasonable to be concerned about the environmental impacts of mining. We all are. But the industry has proven it can do this cleanly and safely.

The resources mining produces are in high demand. As long as people want to buy iPhones, smart TVs, and solar panels, these resources are going to be coming out of the ground one way or another. The question you have to ask yourself is: would you rather do it here in Minnesota, where we have strict environmental and labor standards and oversight, guaranteeing that it is done safely and responsibly? Or would you rather do it in China, Russia, or parts of Africa where they don’t have the same protections we do?

To me, the choice is clear.

Previous Post:
The Role of the Census in the 2020 Elections
Next Post:
Are Red Flag Laws Right for Minnesota?