And the sign said
“Long-haired freaky people need not apply”
So I tucked my hair up under my hat
And I went in to ask him why
He said, “You look like a fine upstandin’ young man
I think you’ll do”
So I took off my hat and said, “Imagine that
Huh, me workin’ for you”[1] 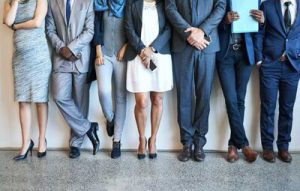 Law firms, in their efforts to bring in and retain clients and referral sources operate under the maxim, “you only have one chance to make a good first impression.”[2] As a result, law firms tend toward restrictive dress-codes and grooming policies. Often requiring male employees to wear dress pants, white or blue dress shirts, and ties; with female employees limited to pant suits, dresses, or skirts and blouses;[3] and often impose strict grooming requirements which dictate acceptable hairstyles, lengths, and color.[4]

In the late 1980’s it was the position of the Equal Employment Opportunity Commission (EEOC) that “allowing female but not male employees to wear long hair, absent a business necessity, was unlawful sex discrimination” and was in direct violation of Title VII of the 1964 Civil Rights Act.[5] However, federal courts have historically allowed employers to implement different dress code standards for different genders, so long as the policy in question does not place a significantly higher burden on one gender over the other.[6] Having met pushback from the courts, the EEOC adjusted its position slightly, indicating it would primarily limit its involvement to cases wherein policies applicable to both sexes were enforced against one gender and not the other.[7]

However, as our culture builds its awareness of implicit biases,[8] microaggressions,[9] institutional discrimination,[10] and outright discriminatory behavior,[11] law firms and other places of business requiring “professional attire” may find themselves in a difficult position trying to balance the old-world definitions of what looks professional with our evolving cultural awareness.

The advance of the CROWN[12] Act (legislation that provides legal protection from race-based hair discrimination), and the Supreme Court’s recent holding in Bostock v. Clayton Cnty.[13] (making it unlawful for an employer to discriminate against an individual for being homosexual and/or transgender) are boons to our minority classes but will certainly challenge employers to create compliant, flexible, and inclusive dress-codes.

I.  The Crown Act

The CROWN Act, which stands for “Creating a Respectful and Open World for Natural Hair,” was first introduced in California in January 2019 and signed into law on July 3, 2019.[14] It “prohibits race-based hair discrimination, which is the denial of employment and educational opportunities because of hair texture or protective hairstyles including braids, locs, twists or bantu knots.”[15] The CROWN Coalition has pushed for legislative change across the country. The Act has been enacted in thirteen states to date,[16] with the Act considered in an additional 25 states in 2020.[17]

“Despite the existence of Title VII, Black women with braids, cornrows, twists, and dreadlocks have faced unfavorable treatment at work.”[18] The courts have held “that Title VII prohibits discrimination based on immutable traits, and . . . dreadlocks—though culturally associated with race—are an immutable characteristic of black persons.”[19] People of color can suffer anxiety and other mental health issues as a result of their hair’s nonconformity to our culture’s “Eurocentric standards of beauty and professionalism.”[20] “For many Black women, complying with … ‘straight hair mandate or expectation’—either through chemical relaxers, heat, wigs, or weaves—comes with real costs and burdens of which many employers are not aware.”[21]

The CROWN Coalition aims to enact legislation and educate those who make or enforce grooming policies about the associated burdens and costs people of color incur in their efforts to comply with a professionalism and beauty standard that their appearance does not fit into.

In Bostock v. Clayton Cnty., the Court was presented with three cases wherein employees were terminated from their positions shortly after their identity as either homosexual or transgender were revealed.[22] “Each employee sued, alleging sex discrimination under Title VII of the Civil Rights Act of 1964.”[23]

In EEOC v. R.G. & G.R. Harris Funeral Homes, Inc.,[24] Aimee Stephens was fired by her long-time employer after informing them that she had decided to live in a way that aligned with her identity and, as such, intended to wear a skirt and jacket as outlined in the funeral home’s dress-code for female employees. The EEOC sued the employer on Ms. Stephen’s behalf, alleging that she was fired in violation of Title VII because she failed to conform to traditional sex stereotypes.

The Supreme Court ruled in favor of Ms. Stephen’s and the EEOC holding that if an employee would not have suffered similar treatment if they were of the opposite sex, then a triable Title VII claim exists.[25] In Ms. Stephen’s case, but-for her birth sex, or in other words if she were born a female, she would not have been terminated from her employment for informing her employer of her intention to wear a skirt in conformance with the funeral home’s female employee dress code.[26]

Notwithstanding potential civil rights violations, employers should draft, implement, and enforce their dress-code policies with care. Improper implementation of such standards risks causing employees psychological, economic, and even physical harm.[27]

The CROWN Coalition, EEOC, ACLU, and many others, are working to highlight the lack of cultural competency in our current standards of what makes a person look “professional.” Independent employers should stand and take notice. The Supreme Court’s recent ruling in Bostock, the slow march of The CROWN Act across the country, a broader understanding of institutional racism following the murder of George Floyd, and corporate America’s increasing move toward being more inclusive toward transgender workers, all indicate that we are moving toward a more equitable and inclusive culture and our dress-code policies should reflect that shift.

[9] Microaggression, merriam-webster.com, https://www.merriam-webster.com/dictionary/microaggression (last visited June 30, 2021) (“a comment or action that subtly and often unconsciously or unintentionally expresses a prejudiced attitude toward a member of a marginalized group (such as a racial minority)”).

“Workplace bans against natural hairstyles like locs, braids, and twists effectively require Black women to cut off or cover their hair and/or don straightened hairstyles.” To maintain a “professional” appearance, many women of color choose to straighten their hair. This can cause permanent damage to the hair and scalp. Medical research also indicates chemicals used in hair relaxers, “may potentially be the source of higher rates of hormone-related infertility, uterine fibroids, and more aggressive forms of breast cancer and uterine cancer amongst Black women.” Smith, supra note 18.

“Transgender employees frequently face discipline for failing to conform to gendered uniform policies for simply dressing and presenting in accordance with their true gender . . . It is because of policies like these . . . that transgender and gender nonconforming people face such high rates of unemployment and poverty.” Erin Mulvaney, Dress Codes Central in Supreme Court Gender Identity Bias Debate, Bloomberg Law (Sept. 24, 2019, 5:41 AM), https://news.bloomberglaw.com/daily-labor-report/dress-codes-central-in-supreme-court-gender-identity-bias-debate.