By Patrick Boyle and Deirdre Dlugoleski.

Deirdre Dlugoleski is a human rights attorney and Bertha Fellow at EarthRights International.

An earlier version of this article was originally published on EarthRights’ website in June 2021. 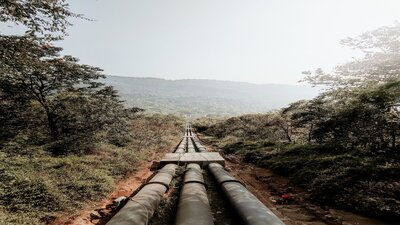 From Standing Rock to Line 3, water-protectors, climate activists, and local communities are resisting pipeline projects that threaten their wellbeing. A worrying trend suggests that extractive companies may be taking a page out of their own international playbook and coordinating with local police forces and private security firms to try to break resistance movements.

As the climate crisis escalates and our political and economic systems continue to fail to meet the moment, the construction of new oil and gas pipelines is an increasingly familiar and predictable flashpoint in the United States. Fossil fuel companies often build pipelines that run through Black, Brown, Indigenous, and other communities of color, exacerbating legacies of environmental racism. Moreover, they pose risks of oil spills that threaten critical lands and waterways and lock us into decades of additional dependence on fossil fuels when radical investments in our sustainable energy infrastructure are long overdue.

Perhaps it is no surprise then, that the Line 3 pipeline expansion project—which traverses Anishinaabe tribal lands and delicate Mississippi River headwaters, and which will increase production of Alberta tar sands oil with carbon emissions roughly equivalent to “50 new coal-fired power plants”—has inspired fierce opposition. In Minnesota, Indigenous water protectors and their allies have fought in the courts, through public protests, and civil disobedience to halt construction.

Ultimately, Enbridge completed the pipeline. Oil began flowing on October 1. Before that, though, Enbridge managed to cause 28 drilling fluid spills at 12 river crossings over the summer – the largest of which released an estimated 6,000-9,000 gallons into a wetland near the Mississippi River – and incurred a $3.3 million fine from the Minnesota Department of Natural Resources (DNR) after Enbridge punctured an aquifer.

Police in the counties along the pipeline, whose departments received generous funding from Enbridge, have enthusiastically monitored and harassed water protectors, including blockading one of the water protectors’ camps at the end of June. In response to a blockade, EarthRights International, the Center for Protest Law & Litigation, and local counsel Jason Steck, sued and obtained a Temporary Restraining Order on July 23 requiring the police to end its blockade; on December 3, the judge granted a Temporary Injunction extending those protections.

In the past, pipeline-opposition movements have been met with heavy-handed treatment by state law enforcement. Only five years ago, the Dakota Access Pipeline protests at the Standing Rock Sioux Reservation showed the world a stark example, as images of state-sanctioned physical violence on protestors surfaced. Since then, journalists have also uncovered disturbing revelations about the role private security firms play behind the scenes.

This approach of utilizing intelligence-gathering by private security firms and coordinating with local police to target and undermine opposition movements has long been a part of the extractive industry’s international playbook and appears to be an increasing part of its domestic strategy, especially where pipelines have faced resistance in Louisiana, Pennsylvania, Oregon, and now Minnesota.

In Minnesota, controversy now surrounds the Line 3 pipeline and its operator, Enbridge, a Canadian energy company that holds a 27.6 percent equity stake in the DAPL pipeline and has a demonstrated history of spills. The Public Utility Commission (PUC) that approved Line 3 explicitly told Enbridge that as a condition of its permit, the company was to refrain from engaging in counterinsurgency tactics. However, the PUC also required a financial arrangement between Enbridge and a collection of local sheriff’s departments which raises concerns that the distinction between private and public security forces has been undermined.

Reports have uncovered details of an escrow account, funded by Enbridge, being used to reimburse local police for materials and time spent specifically on responding to pipeline protests. Local police departments have received exorbitant amounts of money so far, estimated at more than $3 million as of October 6, 2021. Reimbursement requests indicate an unusually heavy police presence along the pipeline’s route—for instance, one county sheriff’s office alone requested wages for 7,500 hours of pipeline-related work over three months.

Water protectors and protestors at Line 3 have reported being followed by police and experiencing harassing traffic stops, instances of intimidation, and suspected surveillance. There are certainly reasons for suspicion—last year, Customs and Border Patrol drones appeared to be surveilling activists’ homes, and incidents of private security firms surveilling Line 3 opponents in Wisconsin were reported in early 2019.

Internationally, arrangements between public security forces and private industry have proven disastrous for human rights and have been used to push unpopular corporate projects on unwilling communities. Look no further than EarthRights’ own litigation portfolio, where state police or military forces have committed egregious abuses related to extractive projects in Nigeria, Myanmar (Burma), and Peru.

The most disturbing similarities to the Line 3 arrangement can be seen in Peru, where a recent law governing the Peruvian National Police allows police officers to provide services to private actors in situations that may compromise and/or affect public order and citizen security. The guidelines for providing these services allow the police to contract with companies – including, among others, those involved in the extraction and transport of natural resources.

A 2019 report by EarthRights—in partnership with Instituto de Defensa Legal and Coordinadora Nacional de Derechos Humanos (a platform of 82 Peruvian human rights organizations)—found that the majority of contracts in effect between the National Police and extractive industries were for projects located in regions with significant local opposition.

Many of these agreements fail to indicate which police units are being deployed, and often contain extremely ambiguous clauses describing their objectives, such as “detecting and neutralizing risks,” guaranteeing the “normal development” of the project, or “controlling acts of vandalism and sabotage or terrorism.” All of these gaps and ambiguous language open the door for private companies to influence both the selection of police units and their decision-making in ways that favor private interests over those of the public.

These kinds of contracts have led to serious abuses. After the Peruvian National Police began providing security services for mining company Minera Yanacocha, police brutally repressed nonviolent community protests against a proposed mine. EarthRights took the case of Elmer Eduardo Campos Álvarez, a peaceful protester who the Peruvian National Police, on contract for Yanacocha, shot in the back; as a result, he lost a kidney and his spleen and became paralyzed. EarthRights also took the case of another protester, Goldman Environmental Prize winner Máxima Acuña-Atalaya de Chaupe, against Newmont, the American company that owns and controls Minera Yanacocha, for harassment on her land and at her home. Consequently, these contracts have been the subject of constitutional challenges in Peru, because they present a clear conflict of interest and weaponize public force for private profit.

Unlike the Peruvian police contracts, the Line 3 permitting agreement never specifies the number of officers needed, meaning, in practicality, that the entire police force shares incentives to engage in pipeline-related policing. Roughly 75 percent of the Peruvian contracts did include exact numbers of officers needed, or at least gave a range; some of these also included the ranks of the officers that should be present. And while the Peruvian National Police generally provide services to companies when they are off-duty, police in Minnesota are being reimbursed by Enbridge for on-duty and overtime hours.

Protecting the Right to Protest

In the United States, we are sometimes guilty of thinking that “it can’t happen here.” The mythos of our democracy can act as blinders when it already is happening here. The privatization of police at Line 3 and other pipeline projects around the country is yet another opportunity to take stock. Law enforcement officers are entrusted with expansive powers and broad discretion and are afforded robust protections under the law for actions they take while on the job. However, those powers and protections are predicated on a social contract that expects them to serve the public equally and fairly. Turning the power of the state against the public to further private ends is corrupting and dangerous.

At best, the financial arrangement at Line 3 risks aligning police and private industry against public citizens engaged in constitutionally protected protest. It creates perverse incentives for police to enrich themselves—both at the departmental level and individually through overtime payments—by prioritizing time spent policing a specific political group. At worst, this arrangement provides a model for co-opting local police and empowering them to act as the private security force of a single, powerful corporate entity.

As of early November, police had made roughly 900 arrests in response to opposition to Line 3. Water protectors have reported that police have used pepper spray and rubber bullets against protesters, and have even used “pain-compliance” techniques, inflicting extreme pain on protesters to get them to unlock from equipment to which they chained themselves. One of the more egregious tactics evolved from the end of June through July, when officers from Hubbard County blockaded a water protector camp on private property. The camp is led by Indigenous women and two-spirit individuals, and is the site of cultural and religious activities, as well as trainings in decolonization and treaty rights. At 6:00 AM on June 28, squad cars arrived and officers informed the water protectors, with no prior notice, that the driveway leading to the camp would be barricaded at 10:00 AM that day. The camp has no running water, and its occupants rely on deliveries of food and water to be able to stay. In the days that followed, police made multiple arrests and issued criminal citations – including to some individuals who were attempting to leave the camp in cars. Officers justified this action on the purported need to protect a county “trail” from developing ruts, though county employees were unable to identify in their court filings when that designation occurred, and simultaneous statements from the Sheriff and his counsel revealed that the true purpose was disrupting protest activity.

In response to the lawsuit filed by EarthRights, the Center for Protest Law & Litigation, and local counsel Jason Steck, Judge Austad enjoined the county, at least until resolution of the case, from barricading, obstructing, or otherwise interfering with access to the property; or stopping vehicles or persons and/or issuing citations, arresting, or threatening persons based on their presence at the camp or driving a vehicle up the driveway.

As the fossil fuel industry fights for its continued survival and conflicts with the public increase, the lesson is clear—the types of private-public funding relationships at issue in Line 3 are profoundly dangerous. The public must stay vigilant and private money cannot provide a model for funding police departments, especially at a moment when the country is debating reforms to make police more accountable to the public.

For updates and to learn more about the struggle against Line 3, we recommend following organizations and movement groups like Stopline3.org, Giniw Collective, Camp Migizi, Honor the Earth, and Rise Coalition.

Previous Post:
Long Hair, Don’t Care—Why Employers Should Reconsider Their Dress-Code Policies
Next Post:
Voting – The Role of Law Students and Attorneys in Safeguarding this Human Right: An Excerpt