The Mitchell Hamline Law Review has honored two alums for their work on the student-edited legal journal during their time in law school and their successful careers since.

Judge Leo Brisbois ’87 and Kathy Kimmel ’96 each received a 2018 Wallace-Lerner Award for Excellence in Leadership during the law review’s annual banquet on Friday, April 6.

Judge Brisbois was associate editor of the Hamline Law Review during his time in law school. After graduating in 1987, Brisbois served as assistant staff judge advocate in the U.S. Army in Germany. He returned to Minnesota in 1991 and worked in private practice for nearly two decades. In 2010, Brisbois became the first Native American to be appointed as a magistrate judge in Minnesota.

Kathy Kimmel served as editor of the William Mitchell Law Review while attending law school. Kimmel graduated in 1996 and has continued to serve the school in a variety of ways since. She spent two years on the board of trustees and six years on the alumni board. Kimmel, a partner in the litigation department of the firm Fox Rothschild in Minneapolis, also contributes to the community through pro-bono work. She’s been involved with the Tubman Safety Project for 14 years, providing free legal help to low-income victims of domestic violence. 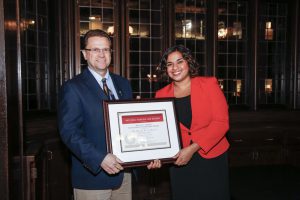 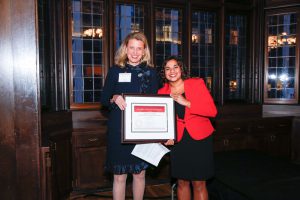