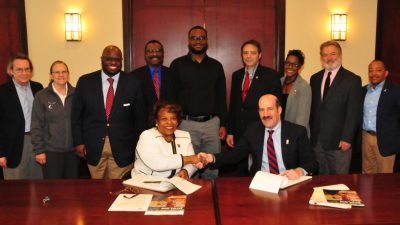 True to its mission of expanding access to the legal profession to underserved communities, Mitchell Hamline School of Law is launching the “Gateway to Legal Education” program. The new initiative will offer free, online, law-related classes to students at colleges and universities that serve primarily minority and first-generation college students.

In addition to taking classes, the students would have the option of coming to Mitchell Hamline for a week long summer program immersing them in the law school experience and in legal practice. They would be paired with a local mentor in the Twin Cities who would serve as a further point of contact and support. They would also be offered a free course preparing them to take the LSAT, the standard entrance exam for law schools. Mitchell Hamline would cover the cost of the summer program for qualified students.

“Our hope is that some of these students might enroll at Mitchell Hamline and possibly even practice here, thus helping to diversify the professional workforce in Minnesota over time,” said Mitchell Hamline President and Dean Mark C. Gordon. “But our fundamental goal is to do all we can to expose a wider group of young people to the profession of law, which has been among the least diverse of our professional ranks in this country.”

Kevin Warren, chief operating officer of the Minnesota Vikings, has agreed to chair the Gateway program’s advisory board. “I am thrilled to be a part of this exciting and innovative program to bring much-needed diversity to the legal profession both in the Twin Cities and on a national level. The dearth of diversity in the legal profession is truly alarming and I am very pleased that Dean Gordon and Mitchell Hamline School of Law are taking such a leadership role in this critically important effort,” Warren said.

The Gateway program extends the successful online learning platform Mitchell Hamline developed for its online/on-campus Hybrid J.D. program to undergraduates. Courses are taught and graded by Mitchell Hamline faculty. Mitchell Hamline doesn’t charge for the classes, but students pay tuition to their home institution based on the credits earned. Students are able to select several courses in areas including health care law, introduction to legal education and practice, and federal Indian law.

Mishoe noted that the University’s Law Studies Program makes DSU a good fit for the effort. “Mitchell Hamline has provided the opportunity, now DSU is going to work with the law school to expand that opportunity.”

Dr. Sam Hoff, professor of political science and Law Studies Program director at DSU, called it a win-win relationship. “This will help Mitchell Hamline to recruit more diverse students and give them exposure to law school professors.”

Negotiations are in process with several other colleges and universities. The Gateway program is scheduled to launch in the spring of 2019.

The Star Tribune featured coverage of the program’s launch in the newspaper’s April 10 edition.

LAW.COM included the Gateway program in an April 23 post in the site’s “Ahead of the Curve” section.