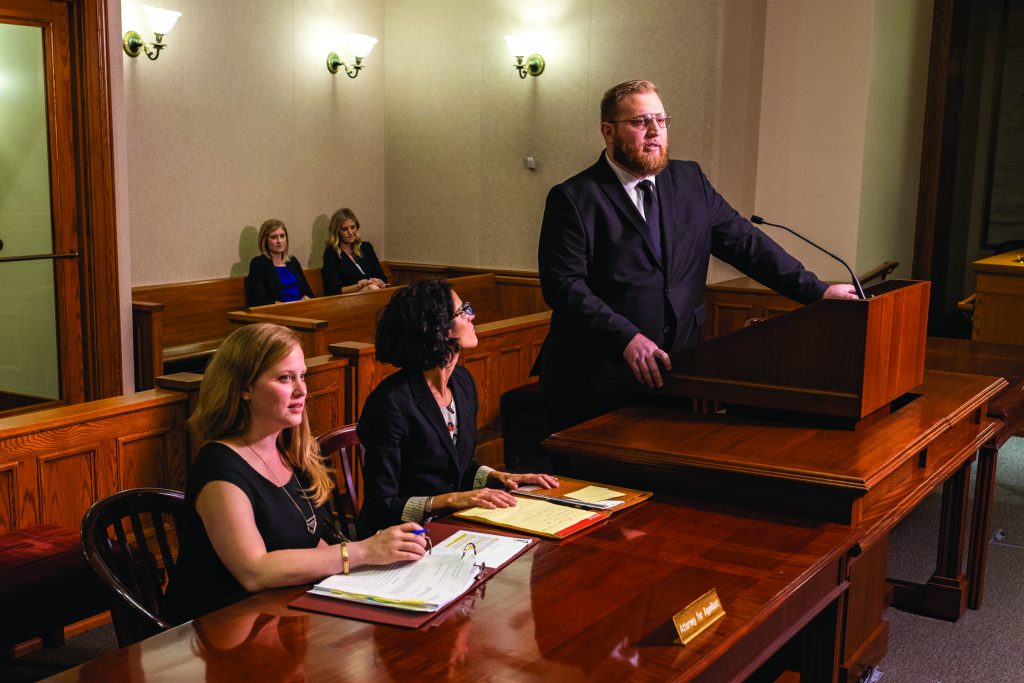 When Scotty Ducharme was a boy in International Falls, Minn., he and his four siblings sought legal protection from their father. Ducharme remembers writing affidavits and talking with the police; his older siblings testified in court. It was a frustrating and difficult process that would rule Ducharme’s relationship with his father until he became an adult.

The children didn’t have legal representation initially, but after a year, they were assigned a Legal Aid attorney, David Kuduk of Grand Rapids, Minn. That’s when everything changed.

“It was like a night-and-day difference having an attorney who was on the case and dedicated and really good at his job,” Ducharme said. “He just did a phenomenal job representing us.”

That attorney’s work inspired Ducharme to go to law school and into child protection law. He’s now in his third year. Associate Professor Joanna Woolman, who leads the Child Protection Clinic at Mitchell Hamline and is executive director of the Institute for Children, Families, and Communities, became Ducharme’s faculty adviser. Woolman persuaded Ducharme to begin working with the clinic in his third semester, giving him the opportunity to participate in a criminal case and a civil case involving the children and parents from the same family.

The criminal case was dismissed. Ducharme and Natalie Netzel, education and advocacy director of the Institute for Children, Families, and Communities, took the civil matter to trial. Ducharme gave the opening statement, examined witnesses, and wrote motions, all with support from the clinic. Their client lost, and Ducharme then argued the case this October before the Minnesota Court of Appeals.

“That was a great experience and not necessarily something I expected, and obviously to go on to the Court of Appeals is a whole other level and a very different ball game in a lot of ways,” he said. “No offense to my doctrinal classes, but there’s no real substitute for the real thing. Clinical work and my externships have been a big part of my legal education so far.”

There’s even more to participating in the clinical programs, according to Ducharme.

“The real advantage of the clinic is they really support you, teach you how to do this,” he said. “You have other classmates who are at your same place in their career development so you’re part of a cohort and you bond as a cohort and establish these really important relationships. That’s a really big feature of the clinic.”