Alum followed his passion to open a craft distillery 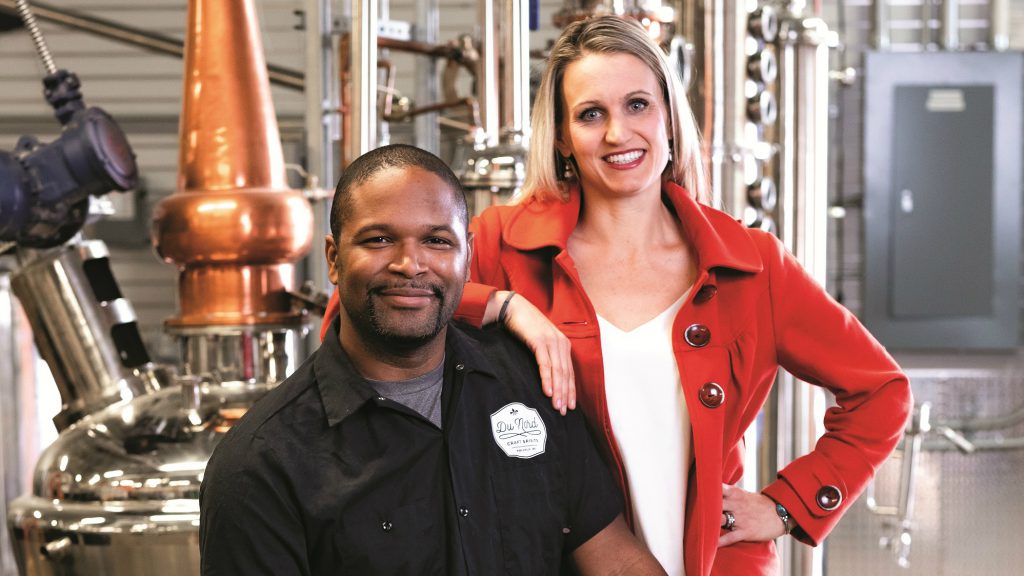 Five years ago, Chris Montana ’13 (HUSL) launched what appeared to be a secure career in a big Minneapolis law firm, Fredrikson & Byron. He’d just received his J.D. from Hamline University School of Law, and landing an associate position at a name firm was a great first professional step.

But he couldn’t shake an idea that had taken root in his mind during his days as a 3L. He and a classmate who shared a passion for home beer brewing had begun talking about the changing landscape of Minnesota liquor laws. Two years earlier, the Legislature had passed the “Surly bill,” which allowed craft breweries to sell their beers in on-site taprooms. What caught their attention, though, was a largely unnoticed amendment to the law that reduced the required fee to start a distillery in Minnesota from $30,000 to slightly more than $1,000.

“So I started doing more research,” Montana recalls, “and within two weeks, I was sold.”

So was his new wife, Shanelle, a Stearns County, Minn., farm girl with a master’s degree in public policy from American University in Washington, D.C. Together, they pulled together the capital to launch DuNord Craft Spirits in Minneapolis in 2013, a few months before Chris would graduate.

For nearly the next two years, he worked in the law firm by day and devoted the rest of his time to DuNord.

“I was putting 100 percent of my mental capacity into trying to grow as an attorney by day,” he recalls, “and then taking whatever was left and coming in here at night and grinding corn and making booze and then going back to work the next day.”

He realized that he had to make a choice, and he left Fredrikson & Byron in the spring of 2015 to commit himself fully to DuNord. That year, thanks to another liberalization in the law, DuNord expanded its operation with the opening of a cocktail room featuring DuNord’s own spirits.

Montana says most of DuNord’s gross revenue now comes from the cocktail room and the remainder from sales of DuNord spirits in liquor stores and bars.

He’s working long hours running his business and handling new duties as president of the American Craft Distillers Association, and he admits he sometimes thinks about the career path he left behind.

“Ultimately, though, I’m still happy with the choice that I made,” he says. “If it was just about money, I never would have left the firm. But it’s not just about the money. I think that for a business like this, you’ve got to have some passion for it. Otherwise, you’ll just burn yourself out.”

Dick Dahl is a freelance writer and editor in St. Paul.