Associate Dean Peter Knapp to be interim president and dean 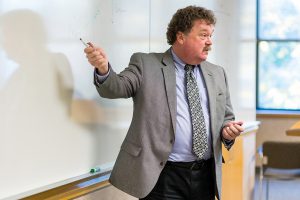 The Mitchell Hamline board of trustees has selected Professor Peter B. Knapp, currently associate dean for academic affairs, to become interim president and dean of the law school beginning July 1.

“We’re thrilled that Peter will be guiding this institution as we search for new leadership,” said Lisa A. Gray ’86, chair of the Mitchell Hamline board. “He is a gifted teacher and skilled administrator who has deep roots in this institution and has earned the respect of faculty, staff, students, alumni, and the broader legal community.”

Knapp, a Nebraska native who earned his undergraduate and law degrees at Harvard University, began his career in private practice in St. Paul. He came to William Mitchell College of Law, a Mitchell Hamline predecessor school, in 1989 as an assistant professor and co-director of the clinical program. He remained co-director of the clinics until 2017, when he became associate dean. Knapp is active in a variety of legal and community organizations and has been honored for his public service by the Minnesota State Bar Association, the Association of American Law Schools, and the Minnesota Justice Foundation.

“Our law school is fortunate to have vibrant and engaged students, wonderful alums in all walks of the profession, and a strong faculty and staff who have worked hard to build Mitchell Hamline. I look forward to working with them next year as we search for a new dean,” said Knapp. He added that he will not be a candidate in the dean search.