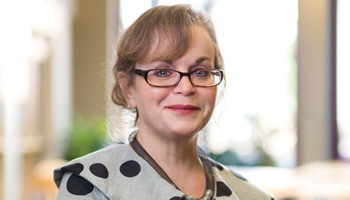 Professor Raleigh Levine has been awarded the James E. Kelley Chair in Tort Law, a professorship created by James E. and Margaret H. Kelley in 1966. James Kelley graduated from Mitchell Hamline predecessor school St. Paul College of Law in 1917. After a successful trial practice, he went on to become general counsel of Hamm’s Brewing Company. He also served on the school’s faculty and board of trustees. Kelley died in 1989.

Levine, whose academic interests focus on the First Amendment rights of freedom of speech and press, said she’s “truly honored” to be named as the Kelley Chair.

“I always look forward to teaching torts to Mitchell Hamline’s first-year students,” she said. “I am excited to continue my exploration of the intersection between tort law and First Amendment law, including issues raised by defamation, invasion of privacy, cyberbullying, and “hate” speech,” she said.

Before she attended law school, Levine was a news editor and producer for CNN Headline News. After graduating with honors from Stanford Law School and clerking for the Ninth Circuit, she spent the first years of her legal career as a litigator specializing in speech and press issues, serving as an attorney for the Southern California ACLU and other public interest-oriented law firms.

“Raleigh’s commitment to her teaching and to her students, as well as her interest in the increasingly complex relationship between free speech and torts, make her a wonderful choice for this chair,” he said.