When the Trump administration ended a program in 2017 that had given temporary legal residence to nearly 3,000 minors from Central America, Ana Pottratz Acosta sprang to action.

Working with the International Institute of Minnesota, the immigration attorney helped screen those in the program, called Central American Minors (CAM), to see if another immigration path was possible. Later, an organization that sued the administration over the elimination of CAM cited Acosta’s work in the litigation that eventually led to its reinstatement. 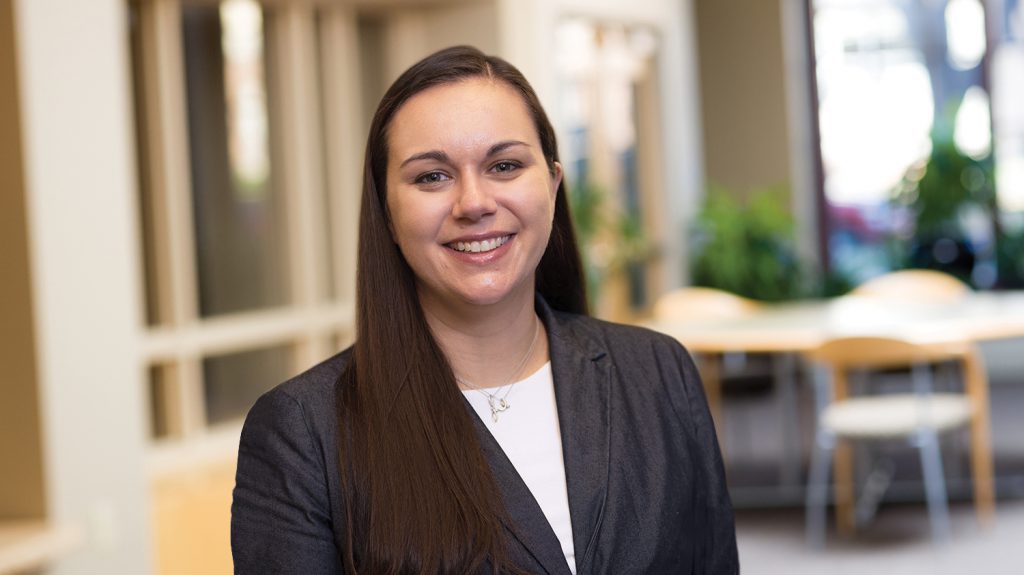 Ana Pottratz Acosta is an assistant teaching professor at Mitchell Hamline and clinical instructor for the Medical-Legal Partnership.

“Ultimately, we didn’t know what was going to happen when we did legal screenings in fall of 2017,” said Acosta, an assistant teaching professor at Mitchell Hamline and clinical instructor for the Medical-Legal Partnership. “But it ended up being much more successful than we ever thought it would be.”

For this and other work in the rapidly changing world of immigration law, the International Institute of Minnesota recently awarded Acosta its Olga Zoltai Award. Named for a Hungarian refugee and immigrant advocate once referred to by the Star Tribune as the “patron saint of area immigrants,” Zoltai also co-founded the immigration law clinic at William Mitchell College of Law in 1985.

The daughter of a Mexican immigrant, Acosta grew up in the central Minnesota town of Melrose. She gravitated towards immigration law, especially after working on an asylum case in law school. She then worked with immigrants and refugees at Lutheran Social Services of New York for six years.

In Minnesota, her work has included helping young people in the DACA (Deferred Action for Childhood Arrivals) program and even going to Tijuana, Mexico, in late 2018 to advocate for asylum-seekers. As clinical instructor for the Medical-Legal Partnership, Acosta supervises students in assisting patients at United Family Medicine in St. Paul with legal issues affecting their health, including issues related to immigrant status.

“Ana is an extraordinary immigration attorney,” said fellow immigration attorney Kara Lynum, a 2011 graduate of William Mitchell College of Law. Lynum accompanied Acosta on that trip to Tijuana and now works for the U.S. Senate. “Her kindness, compassion, and empathy are matched by her deep well of knowledge that she uses to help vulnerable populations.

“Her approach to lawyering should be a goal for all attorneys.”

“A lot of the problems highlighted now have existed a long time, but a lot of issues, particularly in removal and asylum laws, are being exacerbated now,” said Acosta. “The silver lining is students are very motivated to help, and I feel lucky to be in a position to be teaching and training the next generation of lawyers.”